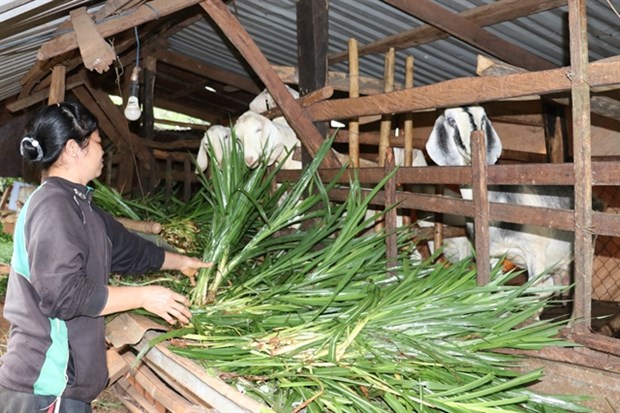 Hanoi (VNA) – A new national programme aims to improve the lives and livelihoods of ethnic minority groups in Vietnam .

As part of the national target programme, approved by Deputy Prime Minister Pham Binh Minh, by 2025, ethnic minorities' income will be double that of 2020.

The overall objective is to exploit the potential and advantages of ethnic minority and mountainous areas, promote economic development, ensure social security, and put in place rapid and sustainable poverty reduction.

It hopes to gradually narrow the gap between the areas' living standards and average income and the national average income, reduce the number of communes and villages with special difficulties and set up an inter-regional socio-economic infrastructure system.

The programme aims to reduce the rate of poor households by more than three percent per year, and all roads will be paved with asphalt or concrete. All schools and medical stations will be upgraded, and 99 percent of households will have access to electricity.

Up to 90 percent of ethnic minorities will have access to clean water and all have television or radio to receive information.

The programme hopes to move 60 percent of ethnic minority households living in remote and isolated areas at risk of flash floods and landslides. Land shortages will also be resolved.

More than 98 percent of five-year-old children will attend school. The rate of students at primary schools, junior secondary schools and high schools will be 97, 95 and 60 percent, respectively.

As many as 98 percent of ethnic minorities will be covered by health insurance and more than 80 percent of pregnant women will receive periodic examinations. The rate of malnourished children will be under 15 percent.

Under the programme, 50 percent of ethnic minorities of working age will receive proper vocational training that is suitable to their aspirations and living conditions.

At least 3,250km of rural roads will be paved with asphalt or concrete. More than 268,860 households will get access to clean water.

More than 17,400 households will receive land and more than 18,300 others receive houses.

The programme will offer vocational training to about 2.25 million people.

About 320 training courses on intangible culture will be organised and 200 projects on traditional culture, which are at risk of disappearing, will be supported.

More than 5,000 poor students will get help to continue their studies every year.

Eighty villages will be used to promote tourism and 800 clubs for traditional culture will be founded.

More than 224,900 prestigious people in the community will be educated about necessary work related to ethnic minority affairs and 30,000 workers at the grassroots level will be taught IT skills./.

National target programme on socio-economic development in ethnic minority areas approved have 590 words, post on en.vietnamplus.vn at October 17, 2021. This is cached page on VietNam Breaking News. If you want remove this page, please contact us.