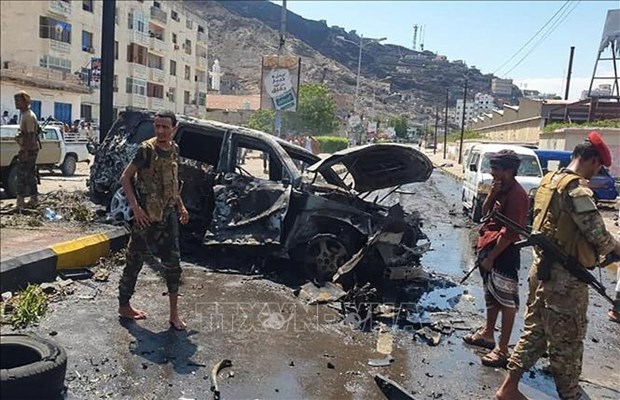 The scene of a car bomb attack in Aden city of Yemen on October 10 (Photo: AFP/VNA)

Hanoi (VNA) – Vietnam has called on relevant sides in Yemen to end all military actions , resume dialogue, and cooperate with the special envoy of the United Nations to work out a comprehensive political solution.

Addressing a UN Security Council meeting on October 14 to discuss the recent situation in Yemen, Nguyen Phuong Tra, Deputy Permanent Representative of Vietnam to the UN, expressed her concern over the military escalation in Yemen and condemned the October 8 attack on the convoy of Yemeni government officials in Aden city, as well as the ones on civilian targets in Saudi Arabia.

Those attacks may jeopardise peace efforts in Yemen and regional stability, she said.

The Vietnam representative appealed to all the parties concerned to respect the International Humanitarian Law and carry out Resolution 2573, including protecting civilian facilities, and urged them to step up the enforcement of the Stockholm Agreement and the Riyadh Agreement.

Speakers at the meeting voiced concern about the worsening humanitarian situation caused by the prolonged conflict, the COVID-19 pandemic, the food shortage, and the economic crisis in Yemen, calling for no impediments to humanitarian aid delivery and more financial support for humanitarian activities.

The speakers also emphasised the need to handle the issue of the Safer oil tanker early to prevent environmental and humanitarian crises.

Members of the UN Security Council welcomed the Yemen visit by Special Envoy Hans Grundberg and voiced support to his peace efforts. Many also expressed their concern over military attacks in Yemen as well as violence against children there.

They condemned attacks on civilian targets and civilians in Yemen and Saudi Arabia, appealing for the protection of civilians and stressing the necessity to maintain stable finance for humanitarian assistance in Yemen ./.

Military attacks may jeopardise peace efforts in Yemen: Vietnamese diplomat have 436 words, post on en.vietnamplus.vn at October 15, 2021. This is cached page on VietNam Breaking News. If you want remove this page, please contact us.