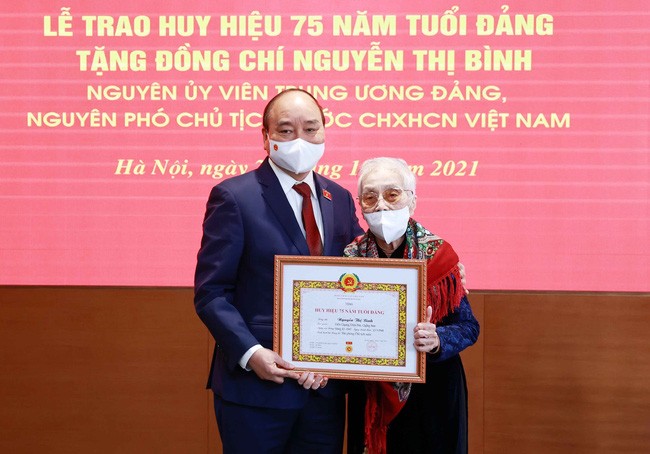 President Nguyen Xuan Phuc (L) and Nguyen Thi Binh, former member of the Party Central Committee and former Vice President, at the event (Photo: VNA)
Presenting the honour to Binh on behalf of the Party and State, Politburo member and President Nguyen Xuan Phuc recalled the former official's important contributions.
President Phuc stated the insignia is also the recognition of the Party, State and people’s appreciation for her contributions to the nation's past struggle for national liberation, as well as the national construction and defence cause at present.
Binh's studying and training process and her revolutionary career is a shining example for the younger generation of Party members to study and follow, he noted.
Emphasised her honour for such conferment, Binh said throughout her life and revolutionary career, she always tried to complete all the tasks assigned by the Party.
Born in 1927, Binh was admitted to the Communist Party of Indochina (now the CPV) in 1947. She had been appointed to many important posts during her career, including Vice President of the Women’s Union for the Liberation of South Vietnam (1960); Minister of Foreign Affairs of the Provisional Revolutionary Government of the Republic of South Vietnam (1969 – 1975); and Minister of Education (1976 – 1987).
From 1992 to 2002, she was Vice President of the Socialist Republic of Vietnam. In 2003, the woman established the Vietnam Peace and Development Foundation, of which she has served as Chairwoman until now. She is also the honorary president of the Vietnam Association for Victims of Agent Orange/Dioxin (VAVA).

Former vice president honoured with 75-year Party membership badge have 378 words, post on m.sggpnews.org.vn at October 25, 2021. This is cached page on VietNam Breaking News. If you want remove this page, please contact us.