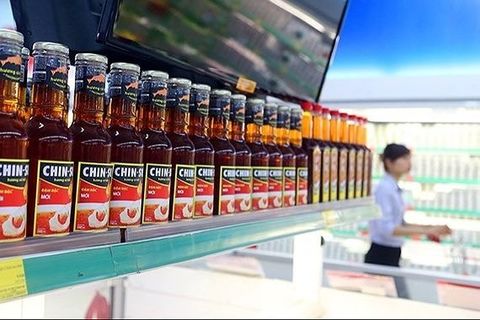 Masan products on the shelves of a supermarket. The company shares lost 1.65 per cent yesterday. — Photo saigondautu.com.vn

Failing to overcome the psychological threshold of 1,400 points on Wednesday, the VN-Index dropped slightly, putting an end to its seven-day rising streak.

On the Ho Chi Minh Stock Exchange, the VN-Index edged down 0.21 per cent to close at 1,391.91 points. The southern market's index had climbed more than 4.4 per cent in the past seven sessions.

By contrast, the HNX-Index on the Ha Noi Stock Exchange extended its rally to eight sessions in a row, rising 0.97 per cent to end at 379.34 points. It has climbed by more than 6.2 per cent since early this month.

Liquidity on the stock market reached VND19.4 trillion (US$843.5 million), down 21.6 per cent from the previous session, of which the trading value on the HCM City's exchange declined 13.6 per cent to VND17.5 trillion.

Foreign traders continued to offload shares with a net sell value of more than VND500 billion on the southern market.

Vinhomes (VHM) and Masan Group (MSN) were the two stocks pulling the VN-Index most. MSN dropped 1.7 per cent and VHM fell 1.1 per cent.

The VN-Index could fall steeper without the cushion of Vingroup (VIC) which was up 0.2 per cent; Mobile World Investment (MWG) up 1.4 per cent; and FPT Corp (FPT), up 0.4 per cent.

According to BIDV Securities Co, the phenomenon of domestic and foreign cash flow weakening when the market reaches a large resistance level may make VN-Index continue to move around the range of 1,380-1,400 in the next trading sessions.

However, analysts at Viet Dragon Securities Co reckoned the market's positive trend will not likely change and investors still hold stocks that are on a good trend, as well as make new disbursement options if there are optimistic signals from stocks in the watchlist

"The VN-Index struggled between the cash inflow and the profit-taking pressure. This struggle is a natural result after a rally," they said in a note.

"Overall, the VN-Index is still in a positive trend in the short term," they said, suggesting investors take advantage of the situation to restructure the portfolio and look for new opportunities in stocks that have a positive accumulation. — VNS

Failing to overcome 1,400 threshold, VN-Index puts an end to 7-day rising streak have 477 words, post on bizhub.vn at October 13, 2021. This is cached page on VietNam Breaking News. If you want remove this page, please contact us.