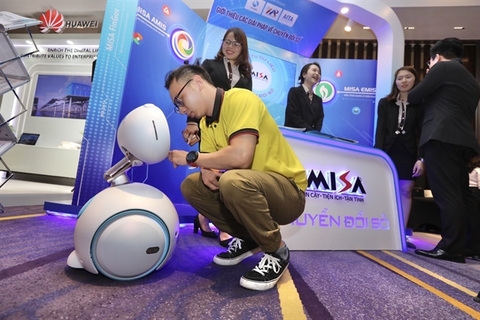 Visitors at a booth during the Digital Transformation Day 2020. Digital transformation plays a key role in economic development. — VNA/VNS Photo

Digital transformation has become indispensable trend of every country since 2020 as the COVID-19 pandemic has accelerated the process around the world.

The comments was made by Vietnamese Deputy Minister of Information and Communications Phan Tam during a ministerial-level roundtable discussion themed "Cutting the cost: Can affordable access accelerate digital transformation?" which took place on Wednesday within the framework of the International Telecommunication Union (ITU)’s Digital World 2021.

He suggested countries pay more attention to affordable access and developing digital platforms which could be considered infrastructure in the digital world.

According to Tam, it is necessary to digitalise socio-economic activities and bring them to digital platforms.

Speaking at the meeting, Secretary-General of the ITU Houlin Zhao said Viet Nam is a good model in telecom infrastructure development that countries could learn from.

Zhao said Viet Nam has been working with countries in Asia, Africa, and Latin America on promoting telecommunication development despite the low profitability and often being ignored by investors.

He added to date, more than half of the world is connected via IT and telecom technologies. However, success only comes when the rest of the world gains access to the internet at an affordable price.

To realise this target, Zhao called for the world to focus on investing in telecom infrastructure via greater incentives and strong partnerships between countries.

At the conference, Azerbaijan's Minister of Transport, Communications and High Technologies Rashad Nabiyev suggested governments should be the backbone in countries' efforts to promote digitalisation.

Minister of Science, Technology, and Telecommunications of Costa Rica Paola Vega Castillo said her country was working on a five-year telecommunication strategy for the private sector to play a greater role in the digitalisation process.

From this process, businesses would benefit under the PPP model, she said.

Sharing the idea, Vietnamese Minister of Information and Communications Nguyen Manh Hung told participants that for every country, the success of digital transformation would depend on leaders at the highest level.

The minister said: "Leaders have to make the difficult choice of restructuring the entire operation and reallocate resources, including the workforce, to embark on the digitalisation process.”

In Viet Nam, digitalisation is centered around the development of the digital economy, society, and Government, with digital infrastructure playing a key part in this process.

"Viet Nam strives to ensure 100 per cent of people have access to the internet by late 2021. The country is in the process of testing 5G networks, with preparation being accelerated to commercialise the network by 2022."

At the ministerial-level roundtable on the same theme on Tuesday, Hung said in order to promote internet access, Viet Nam will shut down its 2G network by 2023. The Vietnamese Government and telecom providers will fund the use of 4G network for 2G mobile phone users, meaning that all phone users will be ready for internet access by 2023.

They discussed ways to deal with barriers regarding residents' affordability for telecom services, policies and measures to minimise costs.

Digital transformation plays a vital role in development have 600 words, post on bizhub.vn at October 15, 2021. This is cached page on VietNam Breaking News. If you want remove this page, please contact us.