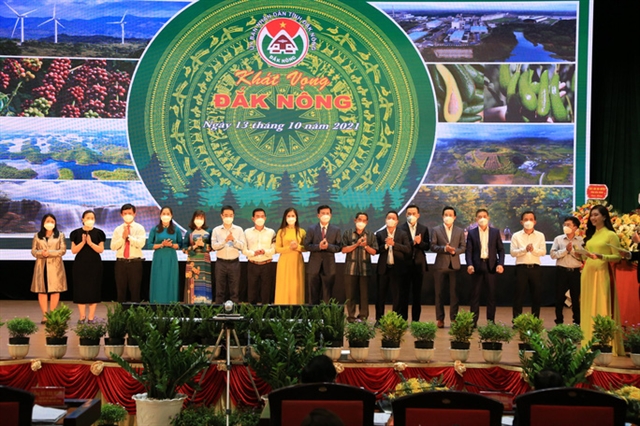 An event to celebrate local businesses' contributions to combating the COVID outbreak while also keeping the economy afloat in Đắk Nông Province on October 13. The province is focusing on improving its investment climate and simplifying administrative procedures. — Photo nld.com.vn

Speaking at an event held to honour local businesses' contributions to the province's efforts to ensure economic growth while also staying safe from the COVID-19 pandemic, he said in the year-to-date Đắk Nông's economy had grown by 7.72 per cent.

The province has been focusing on improving its investment and business climate and offering assistance to key projects in various fields such as solar and wind energy, industrial and agricultural products with high added value and tourism, he said.

Hồ Văn Mười, chairman of the province People's Committee, said Đắk Nông possesses resources such as bauxite, from which aluminium is made.

It accounts for 60 per cent of the country's bauxite reserves.

It also has long hours of sunshine and strong radiation, making it a good place for generating solar power.

It is focusing on improving its road infrastructure, especially connectivity with HCM City and southern provinces. The Government has recently approved an expressway spanning the Central Highlands.

Đắk Nông has huge tourism potential, with historical and cultural relics and great natural beauty in the form of the Đắk Nông UNESCO Global Geopark and the Krong No volcanic cave system, the longest of its kind in Southeast Asia.

But Danh said despite the province's efforts it has been difficult to attract investments. Government agencies and the various regions in the province do not work cohesively, resulting in investors facing difficulties with administrative procedures, he said.

There are also problems related to land-, environment- and investment-related administrative procedures, he added.

Mười said there have indeed been problems with administrative procedures for which he has "apologised to local businesses and vowed not to let it happen again."

The province has nearly 2,400 businesses. — VNS

Đắk Nông Province welcomes investors, says local Party chief have 548 words, post on vietnamnews.vn at October 18, 2021. This is cached page on VietNam Breaking News. If you want remove this page, please contact us.