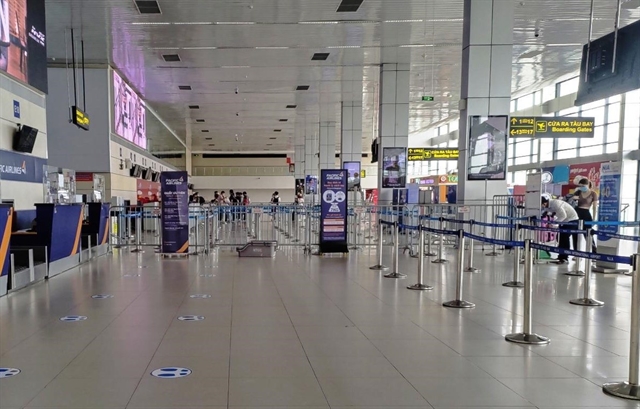 HÀ NỘI — The Civil Aviation Authority of Vietnam (CAAV) has proposed increasing the number of domestic routes from October 20.

The CAAV sent the proposal to the Ministry of Transport for when the first phase of the pilot period of reopening domestic flights ends.

Previously, the CAAV proposed a four-phase plan to resume domestic flights. In the first phase, to be carried over ten days from October 10 to 20, airlines resume routes with a flight frequency not exceeding half of that in the first 10 days of April, the time before the fourth coronavirus wave in Việt Nam. Passengers on the planes must be distanced as well.

The frequency on each route would increase to not exceed 70 per cent compared to the first 10 days of April.

Six flights from Vietnam Airlines, Vietjet, Bamboo Airways and Pacific Airlines (two flights for each airline) would be allowed to operate each route per day.

On other routes, there would be no more than one round trip for each airline on each route.

The CAAV said it would evaluate the COVID-19 situation in these localities and other localities and adjust the flight frequency. In case the pandemic is controlled, the airlines would be allowed to operate normally like in pre-pandemic times from early December.

The CAAV also proposed to remove the seat spacing in this phase.

Results of the first days of piloting the reopening of domestic routes showed that the rate of flights remained low at about 49 per cent compared to the CAAV's expectation.

The total number of passengers was 5,924.

The reason, according to the CAAV, was that the airlines had to wait for the official documents of the Ministry of Transport on conditions for passengers before launching ticket sales.

Strict conditions requiring passengers to be fully vaccinated is another reason because of the low rate of vaccination in many localities.

Passengers would be required to follow the "5K message", make health declarations, and present a negative COVID-19 test result issued at most 72 hours before departure.

Passengers on flights from other localities to Hà Nội must meet one of three conditions, including being fully vaccinated, having recovered from the disease in the last six months, or presenting a negative COVID-19 test result issued within 72 hours before departure.

The proposal has been sent to the Ministry of Transport, and once approved, would be applied from October 20. — VNS

Civil aviation authority proposes increasing domestic flights after October 20 have 647 words, post on vietnamnews.vn at October 19, 2021. This is cached page on VietNam Breaking News. If you want remove this page, please contact us.