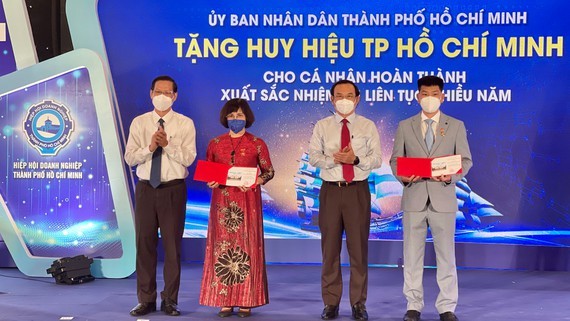 The city will accelerate administrative reforms in the next time for better service. Simultaneously, the city expects businesses to strengthen the adoption of digital transformation, restore production for building a better city, added Mr. Phan Van Mai.

At the ceremony, 93 outstanding entrepreneurs and businesses received certificates of merit from the municipal People’s Committee. These businesses and business owners are those who have maintained production and made many contributions to the prevention of the epidemic, ensuring the city’s social security during the prolonged Covid-19 pandemic.
On behalf of the leaders of Ho Chi Minh City, Chairman Mai expressed his deep gratitude for the sharing and consensus of businessmen with the city and people during the past time.
According to Mr. Mai, despite suffering heavy losses due to the Covid-19 epidemic, the city’s economy by the end of the third quarter of 2021 recorded many positive bright spots, such as positive growth in the banking industry, budget revenue reaching 75 percent of the year plan. 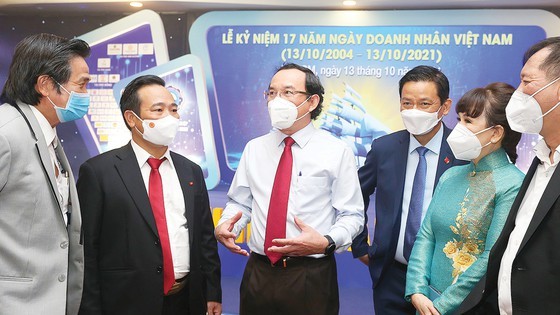 Mr. Mai said that entrepreneurs have made great efforts to overcome difficulties. He disclosed that businesspersons have contributed thousands of billions of dong to the fight against Covid-19 , through the vaccine fund, the construction of field hospitals, the donation of medical equipment.
On his part, Chu Tien Dung, Chairman of the Ho Chi Minh City Business Association, said that from October 1, the city had helped to remove difficulties for restoration of production. He expected that in the long term, the Government and the City People’s Committee will develop epidemic response scenarios so that businesses can still produce.
At the ceremony, city leaders and businesspersons showed solidarity and determination to overcome difficulties and challenges. City leaders called on all entrepreneurs in Ho Chi Minh City, Vietnamese businesspersons in the country and abroad to promote patriotism and nationalism to join hands in successfully preventing the epidemic and speeding up the economic recovery and development.

City administrators listen to businesspersons’ opinions for economic recovery have 578 words, post on www.sggpnews.org.vn at October 14, 2021. This is cached page on VietNam Breaking News. If you want remove this page, please contact us.