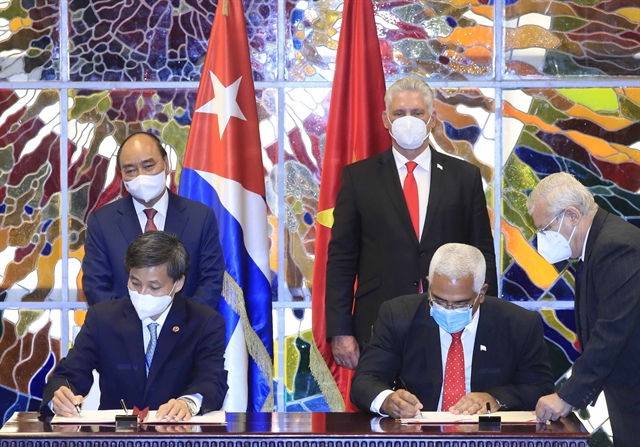 The two leaders briefed each other on the recent situation in each country, while discussing measures to continue to bolster the fraternal solidarity and comprehensive cooperation between the two Parties, States and peoples, especially in the areas of consumer goods manufacturing, food and aquatic production and renewable energy. They also mentioned regional and international issues of shared concern.

He congratulated the Party, State and people of Cuba on their recent achievements as well as the success of the eighth National Congress of the Communist Party of Cuba, expressing his belief that Cuban people will successfully carry out the congress' resolutions and gain new attainments in the path of building the prosperous and stable socialist country of Cuba.

President Miguel Díaz-Canel thanked Việt Nam for giving sincere and whole-hearted support to Cuba's revolutionary cause in the past and at present, especially during this hard time. He affirmed that Cuba highly values Việt Nam's socio-economic development experience.

Both sides expressed their delight at new and positive steps of development in bilateral special traditional ties in all fields, including politics-diplomacy, security-defence, economy-trade-investment, culture-education, and science-technology. The Việt Nam-Cuba cooperation in agriculture and food security has been maintained with rice, coffee, maize and aquatic development projects, they noted.

President Nguyễn Xuân Phúc and President Miguel Díaz-Canel agreed that in the future, both sides should continue to strengthen their political relations through the exchange of delegations at all levels regularly with flexible forms, while enhancing the efficiency of cooperation mechanisms, including the theoretical conference between the two Parties, the Inter-Government Committee, the political consultations between the two Ministries of Foreign Affairs, and policy dialogue between the two Defence Ministries.

Việt Nam and Cuba should work closely together to effectively implement the new trade agreement, while optimising advantages from the deal, thus raising two-way trade to a level that matches the potential and sound political ties between the two countries, they said.

Both sides should continue to seek specific measures to turn cooperation potential in healthcare into specific collaboration programmes, they concurred.

The two leaders also pledged to create favourable conditions for and work closely together in the implementation of joint projects in rice, maize, coffee development and aquatic farming in Cuba, toward the goal of Cuba’s self-sufficiency in food production. The two sides will also foster cooperation in culture, science, technology, sports, tourism and training, they said.

President Phúc thanked the Cuban side for giving the highest priority to the provision of Cuban-developed COVID-19 vaccine to Việt Nam, describing this as evidence of the timely support that Cuba has always given to Việt Nam like Cuban leader Fidel Castro said "for Việt Nam Cuba is willing to shed its blood".

The two leaders praised the close coordination and mutual support at international organisations and multilateral forums, especially the UN and the Non-Aligned Movement. They also affirmed their support for the settlement of disputes through peaceful measures in line with international law.

Following the talks, on behalf of the Party, State and people of Cuba, President Miguel Diaz Canel presented the Vietnamese State leader with the José Marti Order, the highest honour of the Cuban State, in recognition of President Phuc's contributions to the acceleration of solidarity, friendship and cooperation between the two Parties, States and people.

Within the visit's framework, the two sides issued a joint statement of the two countries on the occasion of the Vietnamese President's Cuban visit. — VNS

Việt Nam, Cuba seek to bolster all-round ties have 1024 words, post on vietnamnews.vn at September 20, 2021. This is cached page on VietNam Breaking News. If you want remove this page, please contact us.