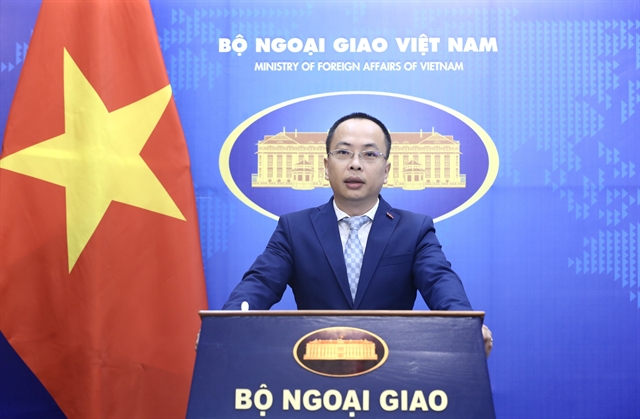 HÀ NỘI — Both US and Vietnamese leaders have agreed to further lift bilateral ties in various fields for the benefit of the two countries and their peoples, deputy foreign ministry's spokesperson Đoàn Khắc Việt said during Thursday’s press briefing.

He made the remarks in response to a question for Việt Nam's reaction to US Vice President Kamala Harris' request to upgrade bilateral relations from Comprehensive Partnership to Strategic Partnership during the recent visit.

"After 18 years of normalisation of diplomatic ties, based on the achievements and aspirations of both sides, the Việt Nam-US relations were elevated to Comprehensive Partnership in 2013," he said.

"Ever since, the two countries' relationship has been further strengthened, witnessing substantive results in many areas both bilaterally and multilaterally, bringing about practical benefits for people and businesses of both nations, contributing to regional and global peace, stability, and cooperation," Việt noted.

In implementing our policies of independence, self-reliance, and always being willing and ready to be a trusted partner, and the wish to contribute positively to peace and development in the region and the world at large, based on the principles of respecting each other's sovereignty and territorial integrity and political system, Việt Nam always sees the US as one of its most important partners, the deputy spokesperson noted.

The two countries' leaders have discussed and concurred to further strengthen ties, especially cooperation in areas such as trade and investment, security and defence, addressing war legacies, climate change response, healthcare, education, and science and technology, according to Việt.

Việt Nam is also deeply thankful for the recent sincere, effective, and valuable support from the US to Việt Nam in its COVID-19 fight, the diplomat stressed.

The US has given Việt Nam a total of six million doses of vaccines via COVAX – five million Moderna doses, in addition to one million Pfizer doses during the recent visit by the US Vice President. — VNS

US always one of Việt Nam’s leading partners: Foreign ministry have 419 words, post on vietnamnews.vn at September 10, 2021. This is cached page on VietNam Breaking News. If you want remove this page, please contact us.