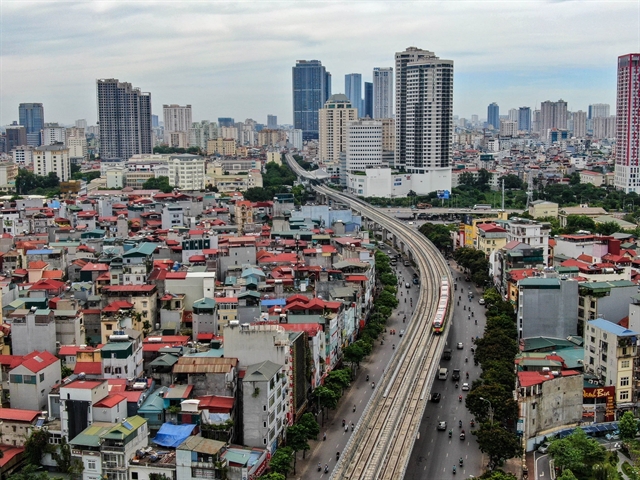 A train runs on a completed section of the Nhổn-Hà Nội railway station (from Nhổn to University of Transport) in Hà Nội during a pilot operation in early July. — VNA/VNS Photo Trung Nguyên

HÀ NỘI — The Nhổn-Hà Nội Railway Station project has been delayed due to difficulties in ground clearance.

The 12.5km line, which is part of the Hà Nội Urban Railway Metro (HURM) project, was approved in April 2019.

During seven years from 2009 to 2016, the project was at a standstill due to slow progress of ground clearance.

In December 2018, the then Prime Minister issued a decision extending the project deadline until 2022.

The project was also allowed to complete an elevated section of the Nhổn-Cầu Giấy part to put into operation first while finishing the underground section.

According to the HURM management board, progress of construction had been considerably improved thanks to the drastic direction of the Hà Nội People’s Committee and coordination among relevant agencies.

However, there were still many problems hindering overall progress.

For example, at the site of underground station No 9, there were currently two households which had not yet complied with the decision on land recovery due to procedures for dividing the inheritance or the owners are living abroad.

At station No 11 on Quốc Tử Giám Street of Đống Đa District, slow work on demolishing a house was affecting the metro line construction. So is the ‘bottleneck’ concerning two households’ properties due to either inheritance problems or that the owner is currently residing overseas.

The project management board's representative told Kinh tế & Đô thị (Economic & Urban Affairs) newspaper that the contractors' complaints were mainly due to delays in handing over the sites. Some locations have seen delays of up to six years.

The contractors had repeatedly claimed compensation worth millions of US dollars and proposed adjustments to the construction deadline.

The contractors had also requested investors, the Hà Nội People’s Committee, sponsors and the South Korean and Italian embassies for paying compensation. They had reduced work on the construction site since June 2021 to put pressure on investors.

In addition, there were locations where site clearance had been completed, but the handover was slow and impacted the progress of the whole project, especially the elevated section.

For example, the location for a staircase at station No 7 was handed over eight months later than scheduled, seriously affecting construction and delaying bidding on the elevated stations (CP02) and railway system (CP07) until December 2021.

Recently, due to the COVID-19 pandemic, the Nhổn-Hà Nội Railway Station metro line project has been facing further trouble.

In particular, the bidding package for the design and installation of the railway system was implemented by a consortium of contractors Astom – Colas Rail – Thales.

A representative of the consortium said that most of the project’s equipment was manufactured in Europe but due to the impact of the pandemic, manufacture and transportation to Việt Nam faced many difficulties in the last two years.

Although investors and contractors had made great efforts, only eight out of ten trains had been shipped to Việt Nam, while much of the technical equipment still had to wait.

The installation of equipment and trains was slow because of slow work on the depot area, which was part of bidding package CP05.

The CP05 package was carried out by the Hà Nội Construction Corporation (Hancorp).

Although the city People’s Committee had given many instructions, the implementation of the CP05 package continues to be delayed.

The delay by Hancorp was seriously affecting the overall progress of the elevated section and leading to the prolonged delay of the CP06, CP07, and CP08 bidding packages, causing losses in money, time and trust in the project.

The Nhổn – Hà Nội Railway Station line has 10 main bidding packages, of which three packages of CP02, CP07 and CP08 expired and were in the process of negotiation. Package CP05 was temporarily extended until December 31, package CP06 was about to expire in September.

The non-renewal of contracts also badly affected the project implementation progress and the operation of the elevated section.

The main reason for not signing contracts was due to procedures for approval of additional costs caused by the prolongation of the contract implementation.

The investors must consult the Ministry of Construction and relevant agencies for approval of additional costs, so it took a long time.

Notably, while there was no consensus on extension of time (EOT) of the project, some contractors had filed complaints and lawsuits with international arbitration or stopped or extended the construction schedule to put pressure on the investor.

The trains are expected to be operated at 35km per hour on average and 80km per hour maximum, the same speed as metros in Paris, Berlin and other cities in Asia. VNS