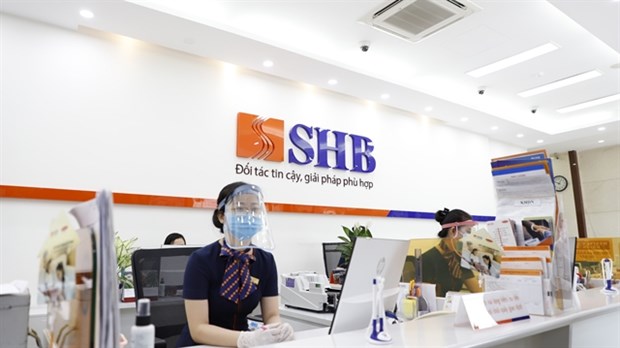 Staff at SHB (Photo courtesy of the bank)

Hanoi (VNS/VNA) – The Saigon-Hanoi Commercial Joint Stock Bank (SHB) was given approval from the State Bank of Vietnam to increase its charter capital from the current 19.2 trillion VND (843.2 million USD) to 26.6 trillion VND (1.16 billion USD).

The charter capital increase aims to improve SHB's financial potential, expand lending scale, and invest in information technology. Especially, it would help promote the bank’s digitisation, realising the goal of becoming a modern retail bank with optimal financial products and services according to Industry 4.0 standards.

Earlier, SHB successfully issued more than 175 million shares to pay the 2019 dividend in May 2021, raising its charter capital to more than 19.2 trillion VND.

In the first half of the year, SHB reached before-tax profit of 3 trillion VND, posting an 86.5 percent year-on-year increase, meeting half of its whole year set target. Its return on equity (ROE) reached 24.3 percent.

As of June 30, its total assets reached 458 trillion VND, increasing 11 percent from the beginning of the year and meeting 99.5 percent of the set target.

With the capitalisation of over 51.6 trillion VND, SHB has been one of the most influential stocks on HNX. The move from listing SHB to HoSE will reduce the market capitalisation of HNX by more than 12 percent./.

SHB approved to increase charter capital to 1.16 billion USD have 410 words, post on en.vietnamplus.vn at September 24, 2021. This is cached page on VietNam Breaking News. If you want remove this page, please contact us.