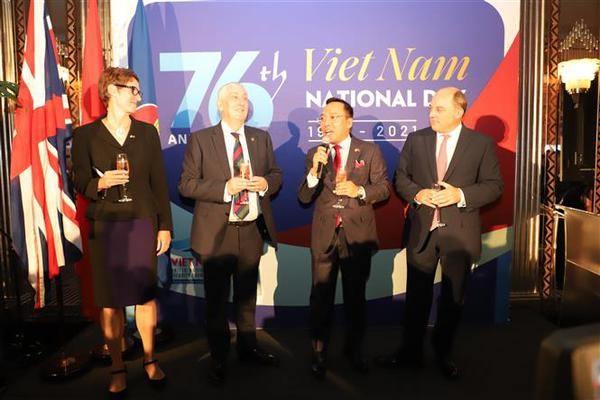 Vietnamese Ambassador to the UK Nguyen Hoang Long (second from right) and British guests at the ceremony. (Photo: VNA)

London (VNA) – The Vietnamese Embassy in the UK held a ceremony on September 20 to celebrate the 76th anniversary of the National Day, gathering more than 500 guests from the host country’s parliament, ministries, sectors, localities, international organisations in the UK and the Vietnamese community in the country.

Speaker of the House of Commons of the UK Lindsay Hoyle ; Minister of State at the Foreign, Commonwealth & Development Amanda Milling, Secretary of State for Defence Ben Wallace; and Communist Party of Britain (CPB) General Secretary Robert Griffiths were among guests.

Addressing the event, Vietnamese Ambassador to the UK Nguyen Hoang Long underlined that the event also aims to celebrate the friendship between Vietnam and partners and all countries in the world.

Highlighting the achievements that Vietnam has made after 35 years of "Doi Moi" (Renewal), the diplomat noted that from a war-torn country, Vietnam has become the fourth leading economies in ASEAN and the 37th in the world, as well as one of the most open economies with the signing of 14 free trade agreements (FTA), including new generation deals.

The diplomat also spotlighted the growth of the Vietnam-UK strategic partnership over the years, including many high-level visits to each other.

He underlined that Prime Minister Pham Minh Chinh's participation in the 2021 United Nations Climate Change Conference (COP26) in Glasgow, Scotland this November and Foreign Minister Bui Thanh Son's attendance at the G7-ASEAN Foreign Ministers' Meeting will contribute to strongly boosting the bilateral partnership in the future. 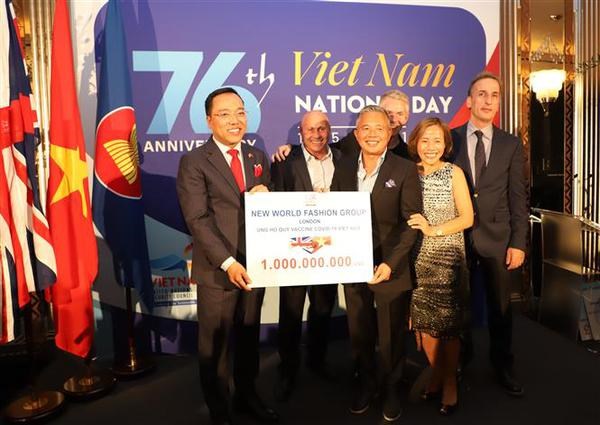 At the ceremony, the Vietnamese Embassy honoured a number of individuals and organisations in the UK for supporting Vietnam in COVID-19 prevention and control activities. They have raised about 575,400 USD in cash and medical supplies for Vietnam.

The embassy also auctioned three paintings by Vietnamese young painters for 6,700 pounds (9,158 USD) for the COVID-19 fight at home.

Participants also had a chance to enjoy a photo collection featuring UNESCO-recognised tangible and intangible heritages of Vietnam, as well as Vietnamese culture and cuisine./.

National Day celebration held in London have 628 words, post on en.vietnamplus.vn at September 21, 2021. This is cached page on VietNam Breaking News. If you want remove this page, please contact us.