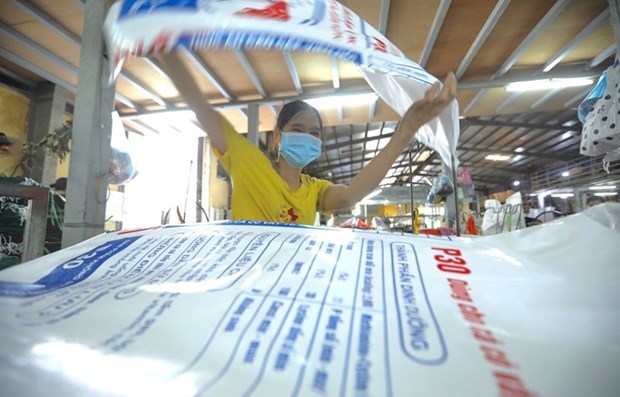 Hanoi (VNA) – Despite adverse impacts of COVID-19 pandemic , social welfare has still been ensured, the macro-economic situation stabilised and inflation effectively reigned in, according to Director General of the General Statistics Office (GSO) Nguyen Thi Huong.

Addressing a press briefing on the socio-economic situation in the first nine months of 2021 on September 29, the GSO official attributed the results to the active engagement of the whole political system as well as the timely and drastic directions from the Government and the Prime Minister, and joint efforts of all sectors, localities, businesses and people in the country.

Huong said that as of September 21, nearly 13.8 trillion VND (605.99 million USD) worth of support had been delivered to nearly 17.6 million pandemic-hit people, of which 11.4 trillion VND was spent on 23 provinces and cities heavily affected by the pandemic.

Meanwhile, 136,349 tonnes of rice from the national reserve had been delivered to more than 2.4 million households with nearly 9.1 million people facing difficulties due to the pandemic in 30 provinces and centrally-run cities. Particularly, Ho Chi Minh City alone had spent over 5,446 billion VND (40 percent of the whole support in the country) to support over 4.8 million people (27.3 percent of the country's total), while offering 1.8 million s ocial security bags for the needy.

Alongside, total assistance and cash and goods to the needy in the first nine months of 2021 reached 10.43 billion VND, including 4,01 trillion VND to policy beneficiaries and 1.62 trillion VND to poor and near-poor households.

At the same time, over 29.3 million free social insurance and health insurance cards had been provided to the needy, she said.

Huong noted that due to COVID-19 impacts, the country's gross domestic product (GDP) growth in the third quarter dropped 6.17 percent year on year, the sharpest fall ever, adding that GDP expansion in the first nine months of 2021 reached only 1.42 percent.

She predicted that in the fourth quarter of this year, Vietnam will face more socio-economic difficulties and challenges. Meanwhile, the high unemployment rate and increased shortage in jobs will affect social welfare, she said.

In order to complete socio-economic goals for the whole year, Huong stressed the need for joint efforts and consensus of the Government, businesses and people.

The GSO head held that on top of all, it is necessary to continue to put the pandemic under control and speed up COVID-19 vaccination.

He advised the Ministry of Health to build and release a medical framework on pandemic prevention and control for the people to safely live with the pandemic, stabilise people's life and completing the dual targets in controlling the pandemic and recovering, boosting economic development at the same time.

An overview of the press briefing on the socio-economic in the third quarter and the first nine months of 2021 (Photo: VietnamPlus)

Moreover, Huong underlined the necessity of effectively implementing policies and solutions to support labourers and enterprises to overcome difficulties in the rest of the year, along with the maintenance of macro-economic stability, the control of prices and the market, thus ensuring the supply of goods and major economic balances.

"We should step by step open the economy, focusing resources on the recovery of production and business activities. This is an urgent need to avoid the long-term impacts on growth motivation of the economy that has exhausted business and people amid the severe effects of the pandemic," stated Huong.

She also underscored the need to tighten finance-budget disciplines, speed up the disbursement of public investment, strengthen administrative reform, while keeping close watch on the domestic and international market to timely remove obstacles facing import-export activities.

It is necessary to closely supervise the weather developments to make natural disaster prevention and respond plans as well as early alert of flooding, drought and salinity so as to minimise losses to production and impacts on people's living conditions, Huong concluded./.

Macro-economic stability, social welfare ensured despite COVID-19: GSO leader have 768 words, post on en.vietnamplus.vn at September 30, 2021. This is cached page on VietNam Breaking News. If you want remove this page, please contact us.