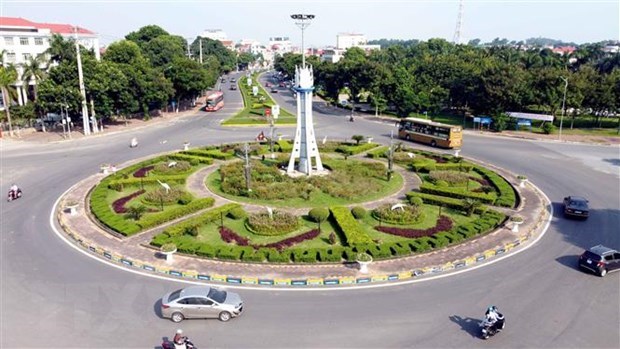 A corner of Vinh Phuc (Photo: VNA)
Hanoi (VNA) – The northern province of Vinh Phuc raked in close to 1.15 billion USD in investment during the first three quarters of 2021, a slight increase from the same period last year, despite economic uncertainties caused by the COVID-19 pandemic.
By the end of September, the province has attracted a total of over 5.01 trillion VND (220.46 million USD) in domestic direct investment (DDI) from 10 new projects and two operational ones, 8 percent higher than the plan.

It has licensed 24 new foreign direct investment (FDI) projects and allowed 19 others to add capital, with the extra investment worth nearly 929 million USD in total, fulfilling 99 percent of the goal.

Vinh Phuc is currently home to 404 valid projects, including 75 DDI projects which have combined registered capital of nearly 19.43 trillion VND. The remainders are FDI projects with total capital of approximately 5.38 billion USD.

The pandemic has caused troubles for many local enterprises in accessing workforce, funding and supply of materials and markets since the beginning of this year. Despite these challenges, the local administration and companies have adopted multiple measures to keep production going and prevent the spread of the virus./.

Investment flows into Vinh Phuc rise in nine months despite COVID-19 have 282 words, post on en.vietnamplus.vn at September 24, 2021. This is cached page on VietNam Breaking News. If you want remove this page, please contact us.