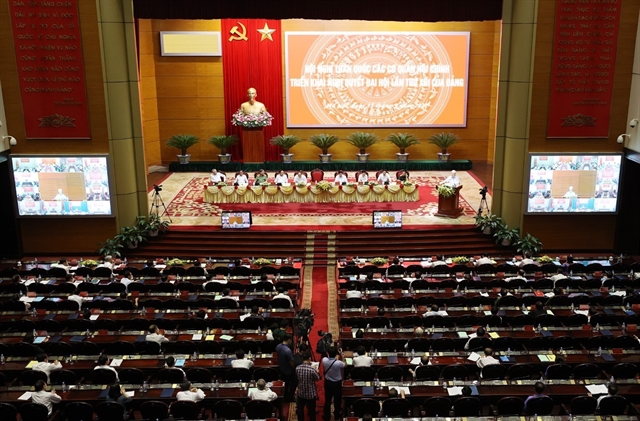 A view of the national conference on internal affairs held on Wednesday in Hà Nội. — VNA/VNS Photo Trí Dũng

This is the biggest internal affairs conference with the participation of 4,600 delegates from nine bodies – the Party Central Committee for Internal Affairs, Party Central Commission for Inspection, Ministry of Defence, Ministry of Public Security, Government Inspectorate, State Audit, Supreme People's Procuracy, Supreme People's Court, and Ministry of Justice. It is the first to be held during the new tenure of the new Government and right after the first plenary session of the new National Assembly.

Politburo member, head of the Party Central Committee's Internal Affairs Phan Đình Trạc presented a summary report on the performance of the internal affairs in the 12th National Party Congress tenure and tasks for the 13th tenure.

Under the leadership of the Party, National Assembly, and Government, internal affairs departments have expended efforts and fulfilled the political tasks set, contributing to national development and cementing public trust in the Party, State, and regime.

Participants agreed that agencies have shown strong performance in giving strategic advice and proposals to the Party and State on major policies regarding internal affairs as well as anti-corruption and judicial reform matters.

The agencies have also played a core role in ensuring the country's independence, sovereignty, unification and territorial integrity as well as political security, social order and safety along with the peaceful life of the people, creating a peaceful, stable, secured and safe environment for national development.

They have also actively worked to detect and settle corruption cases and misconducts in a strict and timely manner, contributing to realising and affirming the Party and State's determination and efforts to combat corruption with the motto of not allowing any "restricted areas and exceptions".

Party leader Nguyễn Phú Trọng in his speech to the conference underlined that internal affairs units are the key force, the 'treasured sharp sword and solid shield' to protect the country, the Party, the people, the political system, as well as maintain stability and order in society.

He urged every internal affairs unit and personnel to fully grasp their role and responsibilities, the laws and regulations and must have proper analyses of the current situation and accurate forecasts of the future developments to advise the Party and State.

Given the current complicated COVID-19 situation, the bodies need to focus on maintenance of security and order, to effectively prevent security-order hot spots, Trọng noted.

Stressing how internal affairs is a major and challenging work that involves different bodies and agencies, the Party chief urged agencies to work together smoothly and effectively, but with proper supervision and power controls between each agency to ensure that the laws are respected during their discharge of duties and that the national interests are placed first and foremost.

In cases of disagreements, agencies should sit back and find a common voice and reach a consensus on the optimal implementation, he noted.

They must have a strong spirit and integrity, possess the will to protect the rights, stand firm against temptations, and remain pure and free from corruption and other negative influences, to keep the reputation of internal affairs sectors untarnished.

General Secretary Nguyễn Phú Trọng believes that, with the tradition of solidarity and a high sense of responsibility, internal affairs unites will effectively implement the Resolution of the 13th Party Congress; continue to strongly renovate their organisation and operations, achieve important accomplishments, and make greater contributions to the cause of national building and defence.

To realise this, they must focus on six main goals: studying and proposing improvements on policies and orientations to internal affairs works; doing better in national security efforts to create a peaceful and stable environment for national development; increasing inspections, supervision, auditing, and tightening disciplines to be more effective in their State management roles; continuing with anti-corruption efforts; building a professional, modern, fair and just judiciary sector to serve the nation and the people; consolidating the organisational apparatus, and boosting international cooperation. — VNS

Internal affairs bodies 'sharp sword and solid shield’ to protect the country and people: Party chief have 984 words, post on vietnamnews.vn at September 15, 2021. This is cached page on VietNam Breaking News. If you want remove this page, please contact us.