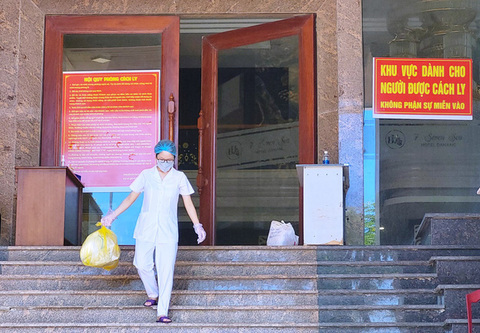 A health worker at a hotel that has been converted into a quarantine centre in central Da Nang City. — Photo cafef.vn

Converting hotels and resorts into quarantine centres has offered many hospitality firms a lifeline during the COVID-19 pandemic.

The pandemic has hit Viet Nam’s tourism sector hard and among the most affected was the hotel industry. Hotel occupancy rates in Ha Noi, Da Nang and HCM City dipped to the lowest levels in the last ten years, according to a recent survey by the Vietnam National Administration of Tourism.

HCM City was a rare exception with its hotel occupancy rate increased by 5 per cent from its lowest to 18 per cent at $69 per night during the second quarter of 2021. It has been largely credited to the conversion of the city’s hotels and resorts to quarantine centres for foreign arrivals. Twenty-five hotels in the city with over 3,000 rooms have been converted for said purpose, with most of them being located in downtown districts and areas near the Tan Son Nhat International Airport. Notably, some hotels have reported an occupancy rate of 78 per cent or greater since the city’s authority gave the green light.

It has been a welcoming sign for the sector, especially for small and medium-sized businesses. While just about 10 per cent of the city’s hotel managed the conversion, more might be able to follow suit in the future to meet demand for quarantine space and COVID-19 prevention, said Troy Griffiths, deputy managing director of Savills Vietnam.

There has been rising demand for quarantine space among foreign diplomats, experts and flight crews, who frequently entered Viet Nam, according to Griffiths.

Griffiths said he was optimistic about the sector’s recovery during the last months of the year.

With 80 per cent of the sector’s business made up of Vietnamese nationals and foreign residents living in Viet Nam, as soon as the virus can be put under control tourism can be expected to bounce back. The introduction of vaccine passports and promotion packages by hotels and resorts should be able to speed things along. — VNS

Hotel/quarantine model offers a lifeline for many in tourism have 601 words, post on bizhub.vn at September 25, 2021. This is cached page on VietNam Breaking News. If you want remove this page, please contact us.