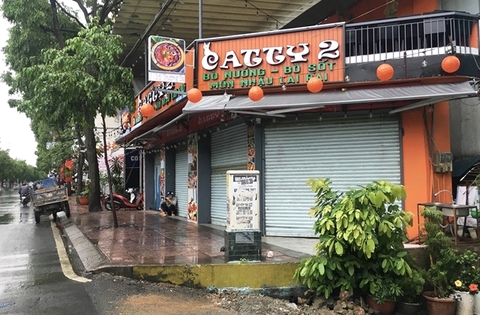 A restaurant in HCM City's Phu Nhuan District that had to close in May due to strict COVID-19 preventive measures. City businesses are hoping for social distancing orders will be relaxed after September 15 so that they can embark on their recovery efforts. — VNA/VNS Photo Hong Giang

HCM City businesses are hoping for a gradual relaxation of the months of tough COVID-19 preventive measures that have stymied their activities.

The city plans to ease them after September 15 if it is able to control the outbreak.

Due to its increasingly stringent preventive efforts over the past three months including closing non-essential businesses and restricting people's movements, many businesses had to close down temporarily or operate at a bare minimum capacity.

An electronic products manufacturer told online newspaper VNExpress that it had virtually no revenues in the last two months, but still had to pay rent, basic salaries and others.

Many businesses have said the economy has to reopen if they are to survive.

Companies that house their staff to be allowed to remain open are struggling with costs and the homesickness of workers.

Pham Thi Huan, general director of food supplier Ba Huan JSC, among the first businesses in the city to provide staff with accommodation, said the company may no longer be able to afford the model and workers “might want to quit” if they have to keep providing staff accommodation.

She too expressed the hope the city would relax its social distancing mandate for businesses after September 15.

Many entrepreneurs are also worrying about ruptures in supply chains. Truong Chi Thien, general director of egg supplier Vfood, said the company is running out of inputs and many packaging manufacturers have suspended operations.

Other businesses want the city to reopen in September to be able to fulfil their orders in the last quarter and also offer tax breaks and low-interest loans to help them recover.

Phan Van Mai, chairman of HCM City People's Committee, said the city would gradually reopen its economy depending on the situation.

On September 9, the city allowed restaurants to resume selling food for delivery until 6pm after two months of closures.

The eateries have to provide accommodation for their workers, ensure they have received at least one dose of a COVID-19 vaccine and strictly comply with all preventive measures.

The city has formed a working group to focus on reviving the economy after September 15 while still ensuring safety.

Le Hoa Binh, deputy chairman of the city People's Committee, has instructed relevant departments to quickly come up with strategies to facilitate economic recovery and safety.

They have also been instructed to focus on issues like improving housing for workers, relief for the public and maintaining social order.

The city is also quickly vaccinating its adult population and getting medical and economic experts look into a 'vaccine green card' system to allow people to travel and work with fewer restrictions.

It plans to vaccinate at least once all adults aged 18 and above by September 15, and fully immunise everyone by the end of the year.

It has for months been the country's COVID epicentre, with over 273,000 cases since late April when the latest wave began. VNS

HCM City businesses want economy to be reopened soon have 646 words, post on bizhub.vn at September 11, 2021. This is cached page on VietNam Breaking News. If you want remove this page, please contact us.