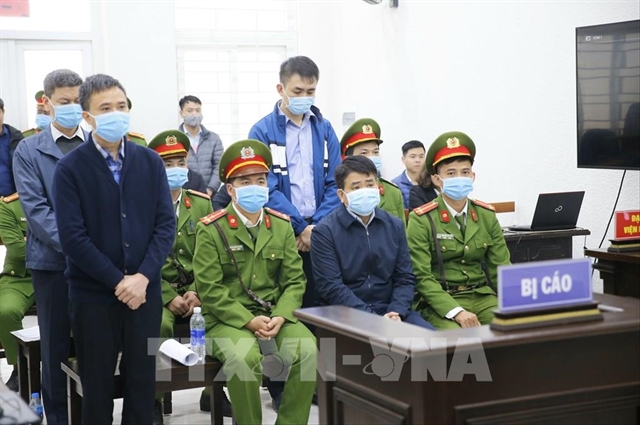 Nguyễn Đức Chung (in the middle of two police officers) at a court hearing in late 2020. — VNA/VNS Photo

HÀ NỘI — The Supreme People's Procuracy has announced an indictment against Nguyễn Đức Chung, former chairman of Hà Nội People's Committee for his involvement in a bidding violation at the city’s Department of Planning and Investment.

Chung has been indicted for abusing power and position while on duty.

The indictment says this is a case involving all defendants who directly committed the crimes, so they have equal roles.

Among defendants of the Nhật Cường – Đông Kinh joint venture, Bùi Quang Huy, general director of Nhật Cường Company, was the mastermind behind the crime, so he played a key role in the case.

According to the indictment, in 2016, the city’s Department of Planning and Investment launched a bidding package on digitalising business registration documents.

Nguyễn Đức Chung, then city chairman, abused his power to order the Department of Planning and Investment to suspend the bidding and was involved in the bidding process without legal authority.

Chung asked the department to allow Nhật Cường Company to pilot the digitalisation project with a personal motivation to create conditions for Nhật Cường to participate in the bidding, win the bid and enjoy the profits.

Illegal acts committed by Chung and officers of the planning and investment department in the bidding process reduced the effectiveness of the bidding package and caused more than VNĐ26.5 billion in damage to State properties.

In December 2020, Nguyễn Đức Chung was sentenced to five years in prison for appropriating State secret documents related to the case at Nhật Cường Company. — VNS

Former Hà Nội chairman indicted for illegal involvement in digitalisation bidding package have 595 words, post on vietnamnews.vn at September 22, 2021. This is cached page on VietNam Breaking News. If you want remove this page, please contact us.