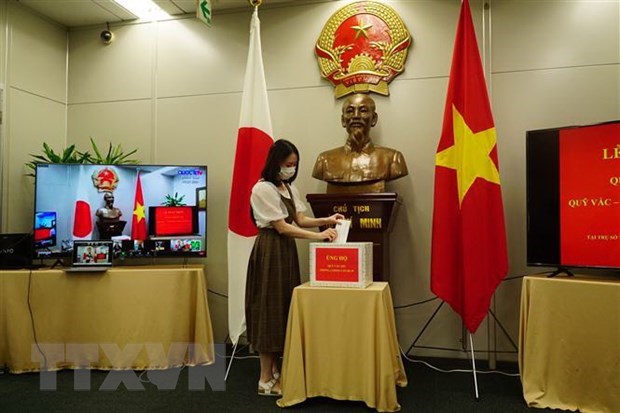 Tokyo (VNA) – The Vietnamese Consulate General in Fukuoka city, in the Japanese prefecture of the same name, raised a total of 7.65 million JPY (69,600 USD) from August 21 to September 15, in support of Vietnam's national COVID-19 vaccine fund.

Speaking at an event to summarize the fundraising campaign on September 16, Consul General Vu Binh thanked the support and contributions of the Vietnamese community as well as Japanese and international friends and partners.

Two members of the House of Representatives Tomioka Tsutomu, and Oniki Makoto sent greetings to the event, expressing sympathy over current difficulties facing the Vietnam ese Government and people.

Tomioka, who is head of the Nagasaki-Vietnam Friendship Association, affirmed that Nagasaki people will stand shoulder-to-shoulder with Vietnamese people in the fight against the pandemic to soon restore exchange activities.
Oniki praised those who engaged in the fundraising drive and expressed his belief that the donations will be useful for Vietnam’s pandemic response.

The Consulate General plans to cooperate with Vietnamese organisations and associations in the region to organize the second fundraising campaign./.

Consulate General in Fukuoka raises money for COVID-19 vaccine fund have 319 words, post on en.vietnamplus.vn at September 17, 2021. This is cached page on VietNam Breaking News. If you want remove this page, please contact us.