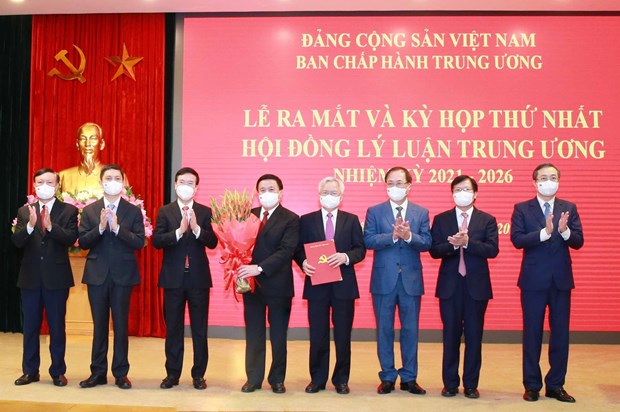 The Party Central Committee announces its decision to establish the Central Theory Council for 2021-2026 at its headquarters in Hanoi on September 12. (Photo: VNA)

Hanoi, (VNA) – The Party Central Committee announced its decision to establish the Central Theory Council for 2021-2026 at its headquarters in Hanoi on September 12.

Politburo member and Permanent member of the committee's Secretariat Vo Van Thuong spoke highly of the intellectual and enthusiastic contributions by the previous council, and stressed the importance of the theoretical work to the revolutionary cause of the Party.

Chairman of the council Nguyen Xuan Thang highlighted that it will perform well its role, functions and duties as an advisory body to the Party Central Committee, the Politburo and the Secretariat on issues of political theory, creating a basis for planning, completing and developing the Party's policies.
In order to fulfill the assigned tasks, the full-term work plan of the affiliates of the council will be concretised and perfected by closely following the Politburo’s Decision on the functions and duties of the council.

Central Theory Council for 2021-2026 debuts have 329 words, post on en.vietnamplus.vn at September 12, 2021. This is cached page on VietNam Breaking News. If you want remove this page, please contact us.