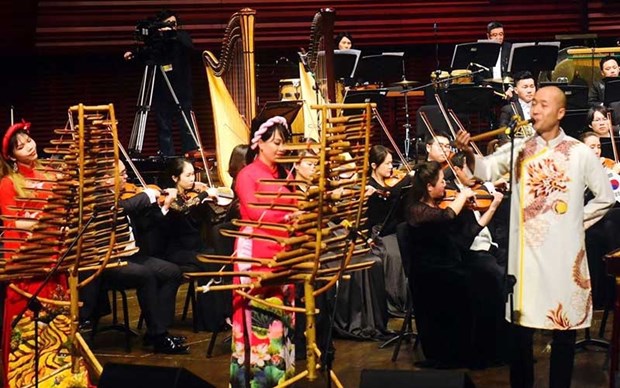 Hanoi (VNA) – With his tireless efforts to promote Vietnamese music, conductor Dong Quang Vinh is known as an "ambassador" by the domestic music world, helping connect Vietnamese with international music.

At the age of 9, Vinh began learning to play the bamboo flute at the VNAM. He was invited to perform on stage in Japan when he was 12. In 2004, Vinh was sent by the Vietnamese government to study orchestral conducting at the Shanghai Conservatory of Music and was awarded the most distinguished student scholarship by the China National Foundation.

Vinh conducted numerous Shanghai youth orchestras attending Chinese national competitions for student orchestras and has won a number of first prizes. During his 9 years of study in China, he performed with famous Chinese artists and carried out various projects that combine Vietnamese and Chinese folk music as part of the effort to promote understanding between the two countries.

He obtained a master's degree in 2013 with highest scores attainable and returned to Vietnam. In Vietnam, he is the conductor and teacher of orchestral conducting of the VNAM; principle conductor of the Vietnam National Opera and Ballet; artistic director and conductor of Hanoi Voices Choir (HVC); director of the Suc Song Moi (New life) Bamboo Ensemble.

The birth of Suc Song Moi came from Vinh's idea that Vietnamese music brought vitality from traditional instruments made of bamboo. The ensemble has been invited to perform at many national and international programmes. Suc Song Moi was also honored as an inspiring orchestra which brings traditional art closer to the people of Vietnam and the world.

Dong Quang Vinh has been praised by the Xinhua News Agency as a person connecting the musical friendship between Vietnamese and Chinese youths.

Along with the success of the bamboo ensemble in Vietnam, in 2018, Dong Quang Vinh was selected by the US government as the only representative from ASEAN to attend the project "promote social change through the arts". He was also one of the two Asian representatives participating in the International visitor leadership project (IVLP)./.

“Ambassador” connecting Vietnamese with international music have 454 words, post on en.vietnamplus.vn at September 27, 2021. This is cached page on VietNam Breaking News. If you want remove this page, please contact us.