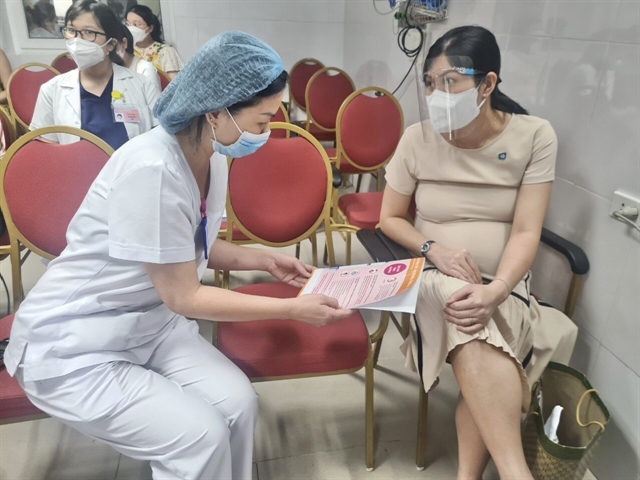 A health worker discusses COVID-19 vaccinations with a pregnant woman at the National Hospital of Obstetrics and Gynecology in Hà Nội on Friday. VNA/VNS Photo

HÀ NỘI — Việt Nam confirmed a further 13,321 new COVID-19 infections on Friday with more than half in HCM City.

The total amount of people to have contracted coronavirus in the country now stands at 589,417.

There were also another 275 deaths reported, including 21 fatalities from previous days added to the total.

On Friday alone, there were 254 deaths announced, lower than the country's average rate in the last seven days which is 302 per day.

The new deaths were in HCM City (195), Bình Dương (41), three each in Tiền Giang, Đà Nẵng, and Đồng Nai, two in Đồng Tháp and one death in Bình Thuận, An Giang, Kiên Giang, Cần Thơ, Bà Rịa-Vũng Tàu, Khánh Hòa and Nghệ An.

There has now been a total of 14,745 COVID-related deaths accounting for 2.5 per cent of total infections which is 0.4 per cent higher than the world's average rate (2.1 per cent).

But there were another 12,751 patients given the all-clear on Friday, bringing the total number of recoveries to 350,921.

There are currently 5,970 people in a serious condition, with 29 requiring life support, according to the health ministry.

13,321 new COVID-19 infections, more than half in HCM City have 520 words, post on vietnamnews.vn at September 10, 2021. This is cached page on VietNam Breaking News. If you want remove this page, please contact us.