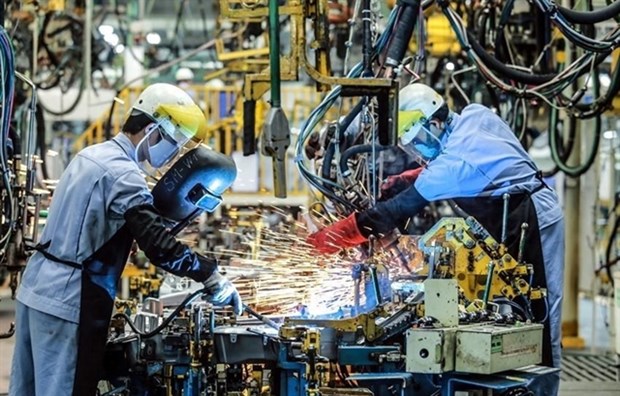 The current wave of the COVID-19 pandemic in Vietnam leads to further disruption across the manufacturing sector during July (Photo: VNA)

Hanoi (VNS/VNA) – The Vietnam Manufacturing Purchasing Managers’ Index ( PMI ) ticked up to 45.1 in July from 44.1 in June, signalling a marked deterioration in business conditions across the sector for the second month in a row.

The latest survey from Nikkei and IHS Markit revealed on August 2 that the current wave of the COVID-19 pandemic in Vietnam has led to disruptions across the manufacturing sector during July. Rates of decline in output and new orders increased from the previous month and employment was down sharply amid reports of temporary company closures and social distancing restrictions.

Meanwhile, disruption was also felt in supply chains, with delivery times lengthening to the greatest extent in more than ten years of data collection. The rate of input cost inflation accelerated sharply, but efforts to secure orders meant that firms raised their selling prices at a relatively modest pace.

"Anecdotal evidence from manufacturers highlighted the impact that the latest COVID-19 outbreak has had on operations. Some firms have been forced to close temporarily, while others are having to operate with reduced capacity due to social distancing measures," the survey stated.

These effects, alongside a marked drop in new orders, resulted in a further sharp reduction in manufacturing production at the start of the third quarter. The decline in output was softer only than those seen following the initial outbreak of the COVID-19 pandemic in March and April last year.

According to the survey, alongside lower total new orders, new business from abroad was also down. That said, the reduction in exports was softer than that seen for total new business amid some reports of improving demand in international markets.

Reduced workloads, temporary closures and limits on staff numbers due to social distancing requirements meant that employment decreased markedly for the second month running. While disruption to operations led to backlogs of work to build up at some firms, this was outweighed by a sharp drop in new orders. Overall, outstanding business decreased moderately.

Severe disruption to supply chains was noted in July, with the extent of delivery delays the most marked since the survey began more than a decade ago. Panellists linked longer lead times to difficulties with transportation both domestically and internationally due to the pandemic, as well as raw material shortages.

Manufacturers were also faced with surging input costs. The rate of input price inflation accelerated the fastest since April 2011. Higher costs for raw materials such as iron and steel, products imported from China and freight charges were all reported by respondents.

While some firms passed on these higher cost burdens to clients, others were reluctant to do so given a weak demand environment. As a result, the rate of output price inflation was much softer than that seen for input costs, suggesting pressure on profit margins.

Concerns around the ongoing impact of the pandemic meant that business confidence remained below the series average in July, although firms remained optimistic overall of output growth over the coming year.

Commenting on the latest survey results, Andrew Harker, Economics Director at IHS Markit, said: "The current wave of the COVID-19 pandemic is having a severe impact on Vietnamese manufacturers, according to the latest PMI data, with company closures and social distancing contributing to a steep drop in production. Rules are also limiting how many staff members can be on site at any time, further disrupting production lines.

“Added to issues with new orders and production, firms are also facing severe supply-chain disruption. Supplier lead times lengthened to an even greater extent than after the initial outbreak of the pandemic last year when price pressures surged."

“The sector is likely to remain under pressure and struggle to generate growth until the outbreak can be brought under control, so it will be important to keep watching the COVID-19 case numbers for signs of improvement,” Andrew said.

Manufacturing recorded the largest gain in the first seven months of this year at 9.9 percent, against the 4.2 percent increase of the same period in 2020. The rise contributed 8.1 percentage points to the whole industry's growth.

It was followed by an increase of 8.2 percent in power generation and distribution.

Vietnam’s manufacturing sees decline in output amid COVID-19 outbreak have 831 words, post on en.vietnamplus.vn at August 5, 2021. This is cached page on VietNam Breaking News. If you want remove this page, please contact us.