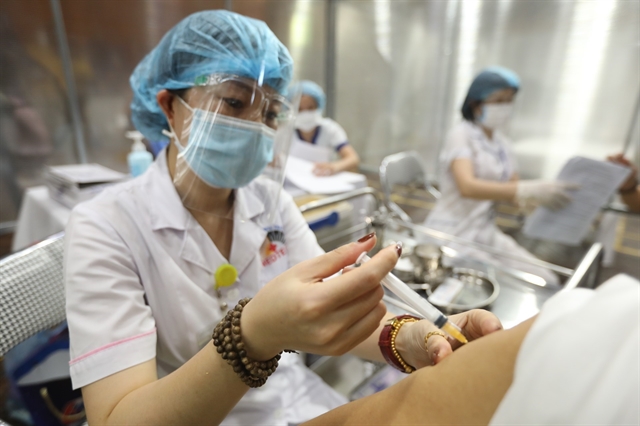 Việt Nam has signed a deal for a total of 31 million doses of the mRNA COVID-19 vaccine. It is also preparing to finalise another deal for additional 20 million doses to be delivered by the end of 2021. The majority of the doses, however, up to 47 million, will only arrive in the last quarter of the year, despite the country currently seeing a severe wave of infections and the lockdown of major cities nationwide. Only about 1 million doses from this deal have reached Việt Nam so far.

During the talks, Long thanked the US Government for their support – especially for the donation of 5 million doses of Moderna via COVAX. However, given the highly contagious Delta variant, Việt Nam is suffering from a serious shortage of vaccines.

The health minister asked the US representative to work with Pfizer to help accelerate vaccination in Việt Nam.

For her part, the USAID Director said the US had struck a deal with Pfizer to provide 500 million doses of Pfizer to various developing countries between 2021 and 2022, and that USAID in Việt Nam is working with the US Government to secure donations of the vaccine.

Long insisted that if possible, the donation should come between August and September as Việt Nam's situation is currently grave amid vaccine supplies limited.

The health minister also said he wants the US to help with high flow ventilators to treat critical COVID-19 patients and ultracold storage equipment to keep mRNA vaccines like Pfizer and Moderna at the correct temperature.

According to USAID, in early September, 77 ultra cold chain storages are expected to arrive in Việt Nam. This was announced by the US Defence Secretary Lloyd Austin during his July visit.

The same day, during the meeting with US CDC representatives in Việt Nam, health minister Long also reiterated his calls for the US to give priority to Việt Nam in terms of vaccine access amid an overwhelmed healthcare system.

The health ministry has been setting up new intensive care centres in the southern region to deal with a large number of seriously ill patients in the ongoing wave of infections, but Long wants the US CDC to help with ventilators and medical supplies in order to reduce deaths.

Noting that Việt Nam's vaccination rate has increased rapidly, the US CDC representative said that this is an important basis for the agency to mobilise other organisations to bring more vaccines to Việt Nam.

Minister Long also said he believed that the vaccines delivered to Việt Nam will be administered "quickly and effectively".

To date, Việt Nam has received some 19 million doses of vaccines, and more than 7.29 million doses have been administered with about 744,330 people fully inoculated. — VNS

Việt Nam wants US to accelerate Pfizer vaccine delivery: Health minister have 667 words, post on vietnamnews.vn at August 4, 2021. This is cached page on VietNam Breaking News. If you want remove this page, please contact us.