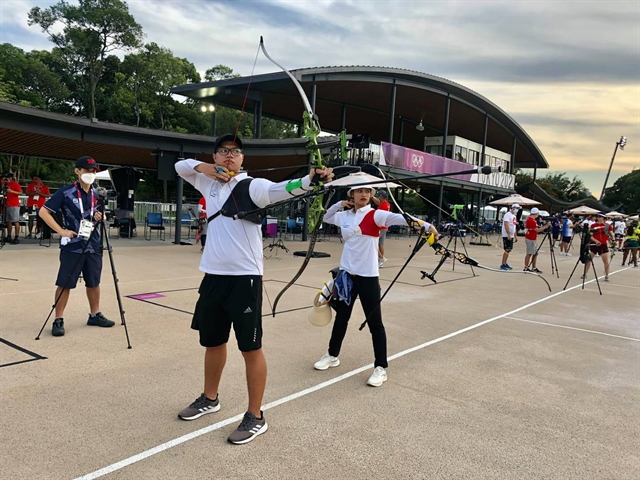 HÀ NỘI — Vietnamese archers have not made a mark on the ongoing Olympic Games in Tokyo but the young athletes are amongst the nation’s brightest stars and will be supported in their future endeavours.

Nguyễn Hoàng Phi Vũ and Đỗ Thị Ánh Nguyệt competed in the men’s and women’s individual events but they were ousted from the first round. According to coach Ngô Hải Nam however, their presence at the world’s largest sporting event should push Việt Nam to look toward long-term strategies for their development.

Nguyệt nearly made a bang when she faced Ren Hayakawa of Japan in the first match. The Vietnamese took the lead after the first two sets before Ren came back and drew, forcing the game into a shoot-off.

In a decisive shoot, 20-year-old Nguyệt who was enjoying her first-ever Olympics, scored 7 points, one less than the Japanese London Olympics bronze medalist. Nguyệt, subsequently, was eliminated.

Meanwhile, Vũ, 21, could not beat Tang Chih-chun of Chinese Taipei who had already won a silver in the men’s team event in Tokyo and would go on to finish fourth in the individual category.

“The result (628 points from 72 shots) is not as good as expected but it is the first time that I have taken part in an Olympics. I have done my best. I will take this honour as encouragement for my career. I will try to secure a place at another Olympics and get better scores,” said Nguyệt, the youngest member of Việt Nam's team.

Coach Nam said his players' results showed their remarkable efforts especially when they did not have the necessary preparation because of the COVID-19 pandemic.

“For more than one year they could not have intensive training and competitions abroad. There is a big gap of level between Việt Nam and the rest of the world. At this Olympics, we just want to learn as much as possible and take these opportunities to sharpen our skills and strengthen our minds."

“It is important that our archers can show their strong spirit and be confident throughout their shots,” Nam said.

The two slots at the Olympics along with three golds, two silvers and one bronze won at the 2019 SEA Games will form a solid foundation for Việt Nam when the coming SEA Games are held on home turf.

Việt Nam aims to protect its top position at the regional Games which is delayed until next April or May in Hà Nội.

“Having chances to vie against world leading athletes is great. I am so lucky. I have collected experience throughout these matches. I will work harder for the coming tournaments, especially the 31st SEA Games,” said Vũ who will defend his mixed double title.

“Their Olympic slots and performance at the Games show promise that they could go much further. We will create the best conditions for them to achieve better results. International training camps and tournaments will be included when the pandemic is controlled,” said Vinh.

“First of all, we will seek sponsorship and organise more domestic events so that athletes can compete frequently and improve their skills.

“Later on, we will build up programmes to develop the sport and make it more popular among the community and will help to have a strong archery training movement and find our most talented athletes. We will also cooperate with localities to set up training programmes for juniors who can shoulder national team’s obligations when the current athletes retire,” he said. — VNS

More support for Olympic archers moving forward have 826 words, post on vietnamnews.vn at August 1, 2021. This is cached page on VietNam Breaking News. If you want remove this page, please contact us.