At the same time, the departure ceremonies were organized in Thu Duc City and 20 districts across the city with the participation of tens of thousands of soldiers, police and military officers of the Ministry of Defence, Ministry of Public Security and the 7th Military Region. 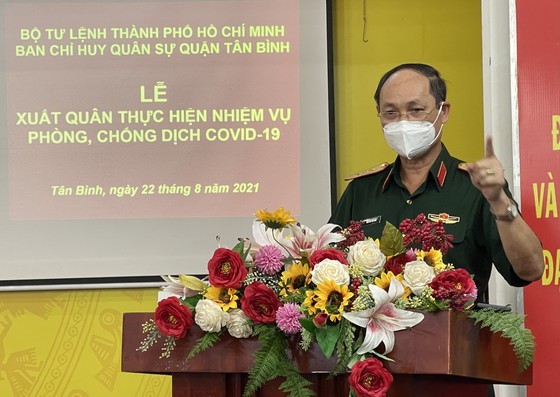 Commander of the HCMC High Command, Lieutenant General Nguyen Van Nam speaks at the event.
Accordingly, 58,000 soldiers, military officers and militiamen will be divided into mobile medical teams to collect sample for Covid-19 testing, implement vaccination, provide treatment for Covid-19 patients, patrol the streets, control travelling vehicles and travelers at 12 city-level stations and 251 district-level checkpoints, support districts to deliver bags of foods to local residents and buy food for people across the city.
Speaking at the ceremony, Commander of the HCMC High Command, Lieutenant General Nguyen Van Nam said that it is the first-ever significant large-scale campaign shows the tradition of the Vietnamese People’s Army. It is also the Armed Force's functions and missions, including fighting, military missions and production.
The military force will coordinate with the departments of police and health, and functional units to simultaneously carry out tricter measures requiring people to “stay where they are” under the Directive No. 16 /CT-TTg dated March 31, 2020 of the Prime Minister on urgent measures to prevent and control the Covid-19 pandemic.

Commander of the HCMC High Command, Lieutenant General Nguyen Van Nam (L) enourages soldiers at the departure ceremony.
On August 22, 175 doctors of the Military Medical Academy under the Ministry of Defence and soldiers of the Brigade 75 of the 7th Military Region have been assigned tasks in 15 wards and Covid-19 control stations in the city, said colonel Nguyen Trung Son, Head of the the military commands of Tan Binh District.
In related news, a delegation of 113 doctors, 180 students and two officials of the Military Medical Academy led by Colonel Nguyen Anh Tuan on August 21 left Hanoi for HCMC to support the southern hub to fight the Covid-19 outbreak.
The delegation will be divided into 60 military medical teams with two doctors and three students of each group. They will collect sample for Covid-19 testing, monintor and treat people with common illnesses, take care of F0 cases at home, Lt. Gen. Prof. MD. PhD. Do Quyet, director of the Military Medical Academy. 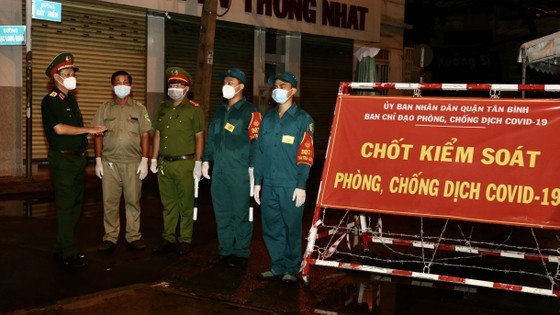 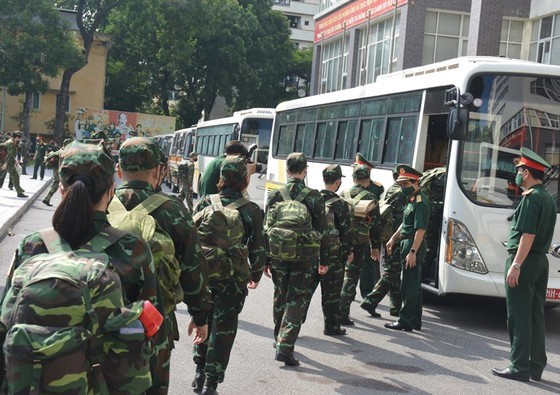 Doctors and students of the Military Medical Academy leave Hanoi for HCMC.

Military force begins campaign against Covid-19 in HCMC have 514 words, post on www.sggpnews.org.vn at August 23, 2021. This is cached page on VietNam Breaking News. If you want remove this page, please contact us.