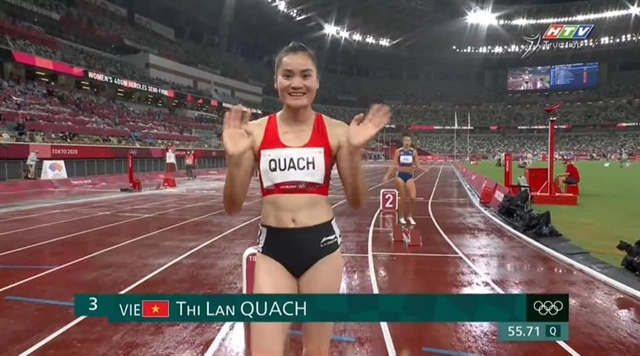 Quách Thị Lan, the last Vietnamese athlete to finish competing in Tokyo, has ended her journey after finishing 6th among eight runners in the 400m hurdles semi-final 1. — Photo TV Screenshot

TOKYO — Quách Thị Lan, the last Vietnamese athlete still in the Olympics, ended her journey in Tokyo after finishing 6th out of eight runners in the 400m hurdles first semi-final.

Under heavy rain, Lan finished with a time of 56.78 seconds. This is 1.07 seconds and 1.48 seconds less than her previous performance in Heat 3 of the qualifiers and her personal best, respectively.

After a false start, due to Amalie Luel of Norway taking off too soon (she was subsequently disqualified), Lan managed to place sixth beating Linda Olivieri from Italy.

First place belonged to the defending Olympic champion Dalilah Muhammad (USA) with a time of 53.33 seconds while Jamaican Janieve Russell finished second to go through to compete in the final.

Despite being defeated, Quách Thị Lan's journey will be one to remember. She had the best performance in the history of Vietnamese athletics.

Of 40 athletes, Lan was the only athlete to compete in the Tokyo Olympics through a wildcard entry and the only unranked athlete in the top 24 best runners in the semi-finals.

However, with a lot of effort and a little bit of luck – Jamaican Leah Nugent was disqualified for a lane infringement error bumping Lan up to fourth place and through to the semi-finals – Lan became the first Vietnamese person to compete in an athletics semi-final.

This brings to an end Vietnam’s participation at the Tokyo Olympics 2020.

Lan’s historic Olympic journey ends after placing 6th in semi-finals have 399 words, post on vietnamnews.vn at August 2, 2021. This is cached page on VietNam Breaking News. If you want remove this page, please contact us.