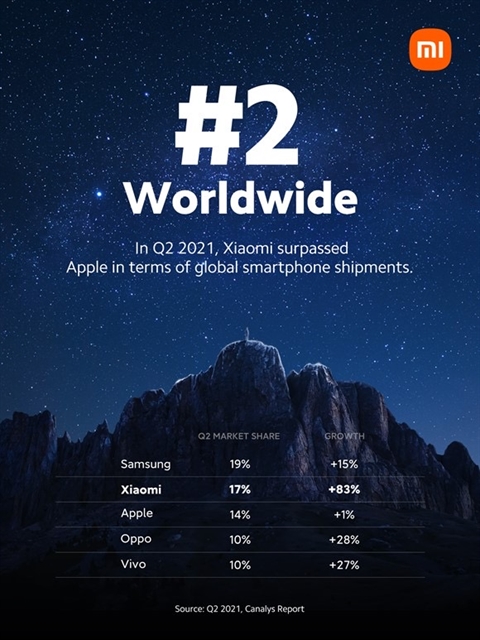 Xiaomi surpassed Apple to become the second largest global smartphone manufacturer in the second quarter of the year. — VNS Photo

It said the Chinese brand surpassed Apple with a 17 per cent share in the second quarter after achieving 83 per cent year-on-year growth.

Canalys said Xiaomi is now transforming its business model from challenger to incumbent with initiatives such as channel partner consolidation and more careful management in the open market.

Next in its sights is Samsung, the world's largest vendor, it added.

Lei Jun, founder, chairman and CEO of Xiaomi, said becoming the world’s No 2 was a key milestone in the company's history.

After five years of growth under extremely difficult conditions, its product capabilities have improved significantly, and it plans to keep strengthening its core capabilities and cement its second place, he said.

He said since launching its first premium flagship Mi 10 series, it has been innovating in critical areas such as imaging, display, charging, and smart manufacturing.

It now eyes breakthroughs in the premium market and cutting-edge technologies to help to shape the direction of the industry, he said.

The first phase of its smart factory has started operations. The production lines are automated and capable of manufacturing a million high-end smartphones per year.

It is also a huge lab to research new materials and technologies and test advanced manufacturing and production processes. — VNS

Xiaomi rises to No 2 in global smartphone market have 301 words, post on bizhub.vn at July 24, 2021. This is cached page on VietNam Breaking News. If you want remove this page, please contact us.