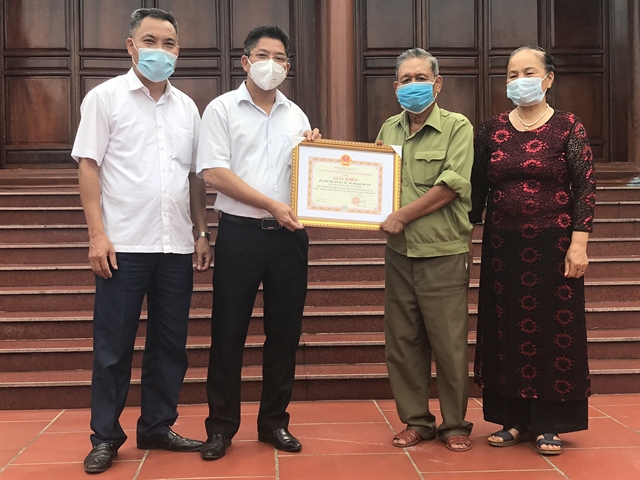 Đệ and his wife receive the certificate of merit granted by Thanh Hà District's authorities for their contribution to the vaccine fund. VNA/VNS Photo Tiến Vĩnh

Battle-hardened Vietnamese soldiers bravely fought foreign invaders during the anti-American war, and now a tough veteran is stepping up in the national fight against a deadly invisible enemy, COVID-19.

Our hero is 75-year-old Lê Văn Đệ in Thanh Sơn Commune, Thanh Hà District, in the northern province of Hải Dương. Wounded in the war, Đệ has a deformed hand and pieces of shrapnel still remain in his body. But despite such hardships the former soldier has used his retirement savings as well as family money to donate VNĐ4.5 billion (US$196,000) to the national coronavirus vaccine fund.

"Đệ is a war invalid and his wife is a retired teacher. They have led a decent life being kind to their neighbours," says Đoàn Văn Nằng, a Thanh Sơn resident.

"This family of a veteran and teacher used to be the poorest in the village. Fortunately, their life has much improved over the years and they have supported others the most in our village," Nằng says.

The ex-soldier has experienced several critical strokes over the years, the first of which was seven years ago, but he has miraculously escaped death's scythe every time. Since his first stroke, a hearing aid has become an indispensable part of his life.

As a consequence of such severe strokes, Đệ has not been able to maintain a sharp mind. Trying to reassemble a few fragments of his intact memories, he says: "I participated in the resistance war against the Americans in 1971 as a private in Military Region 3 in the North, and then Military Region 7 in the South."

"My husband joined the army right at his workplace," says Đệ's wife, Nguyễn Thị Đào. "The country was in dire need of soldiers at that time. He went home in the afternoon and immediately had to leave for the battlefield the next morning."

After the liberation of South Việt Nam in 1975, he returned to his home with a deformed hand and fragments of bombs in his body. He was assessed to have lost 22 per cent of his health and assigned to work for the Thanh Miện Tractor Station. Due to poor health, he had to leave the job in 1981.

However, the unflinching spirit of the Vietnamese soldier ensured he was not discouraged. Instead, he chose to lead a full life, taking up a variety of work. He would sometimes even travel to the northern province of Quảng Ninh to grow lychees to supplement his wife's meagre salary as a primary school teacher and help raise their four children. 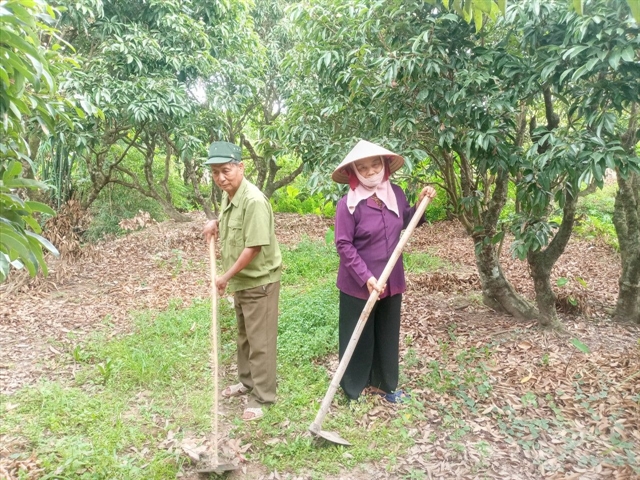 Though Đệ’s health deteriorated after the war, he always tried to support his wife through farm work. Photo: cucchienbinh.vn

Since their lives have improved, they have done charity work, helping neighbours who have fallen on hard times however they can. It is this spirit that led them to donate all of their retirement savings to the national vaccine fund. It was a decision they made in just one night.

"The whole nation is struggling against the pandemic; being elderly we did not know how to practically contribute. When I happened to watch TV and saw the Prime Minister calling on people to support the vaccine fund, I immediately thought of making a donation," Đệ says.

"I discussed it with my wife, suggesting we donate all of our retirement savings of VNĐ500 million because the nation needed it more. If we suddenly get ill, we could ask our children [one son and four daughters] for support. She thought for a moment and then nodded in agreement."

Their successful children have also enthusiastically supported their parents and even contributed VNĐ4 billion in kind [4,000 tonnes of cement] to the fund too.

"Don't consider me as a war invalid but just as a normal person," Đệ says.

"Many of my comrades fell and their remains have not yet been found. Some of them I didn't even get the chance to know their names. We shared our meals together at dusk and then they were sacrificed that night."

"I was fortunate to survive the war and return home. And now, I want to join hands to fight the pandemic 'enemy'. This fight takes much strength but everyone must be united. Each citizen has become a soldier, and I believe that our united contribution will finally beat the pandemic."

Đệ and his wife have received a certificate of merit from Thanh Hà District authority for their contribution to the vaccine fund.

According to the wishes of his family, their donated money will be used to buy coronavirus vaccines for all villagers of Thanh Sơn Commune, about 5,000 people.

"They are the first household in the province to support the fund with such a large amount of money," says Trịnh Văn Thiện, secretary of the District Party Committee.

"I highly appreciate their meaningful deed, which will create conditions for people in Thanh Sơn Commune to be vaccinated and contribute to the effective prevention of the virus for the whole of Hải Dương Province."

Thanh Sơn has set up a separate account to receive donated money for the vaccine fund, and proposed that the district and province support with vaccine sourcing and organising virus vaccinations for all of its villagers as soon as the fund is sufficient.

Việt Nam earlier this month launched the largest ever campaign to provide free COVID-19 vaccination to people aged 18 and older. 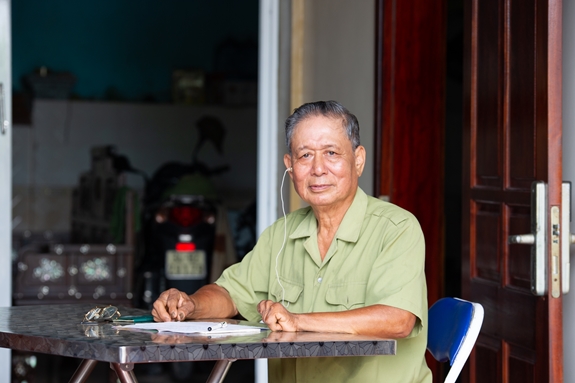 War veteran Đệ has financially supported the construction of many public works in his hometown. Photo qdnd.vn

The donation to the national vaccine fund is not the first time that Đệ's family has helped wider society.

According to village chief Đoàn Văn Luân, the couple has always enthusiastically participated in village work as well as financially supported the construction of many public works and pagodas. However, few villagers know of their help as they prefer to keep it quiet.

"They have contributed much to the building of our homeland, but never want their help made public. Đệ often tells us to keep it a secret," Luân says.

"But let me reveal one thing; all the money to build the main concrete road in our neighbourhood was from Đệ's family."

Their family was much better financially when all of their children became well-off; however, Đệ and his wife still lead a simple life, still using a near obsolete phone their children bought them many years ago, even though they have suggested getting them a modern one.

The phone suddenly rings and Đệ jokes: "They are calling again to remind us not to go out in case we get infected by the virus!" VNS

War veteran joins coronavirus battle have 1353 words, post on vietnamnews.vn at July 25, 2021. This is cached page on VietNam Breaking News. If you want remove this page, please contact us.