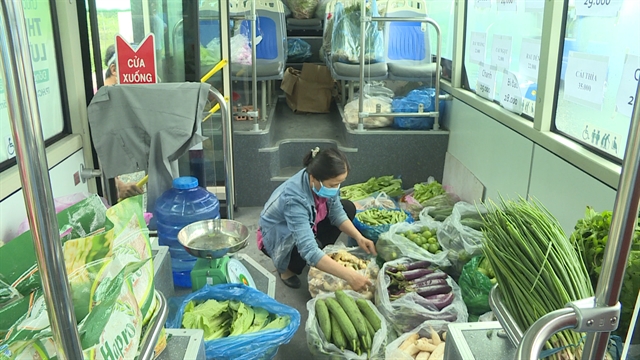 Vegetables being loaded into a bus belonging to Bảo Yến Construction Services Tourism Co., Ltd. in HCM City last week. Five such buses are being used to distribute vegetables around the city. – VNA/VNS Photo

HCM CITY — I was surprised to receive a call from an American friend who lives in Singapore, asking about the pandemic situation in HCM City, Việt Nam's current COVID-19 epicentre with a daily record of thousands of cases.

He was concerned that the situation could spin "out of control", comparing it to India or Indonesia.

I told my friend that he had called at a good time as I had just read a news story from the Singapore-based The Straits Times, headlined "Vietnam grapples with public frustration over Covid-19 pandemic missteps and transparency", mentioning the growing unhappiness about the pandemic control measures.

The story, I believe, described the situation in a superficial way. I have closely observed the global situation, especially in the US, EU and Asia Pacific, so I was also shocked initially at the surge in cases in Việt Nam as it had successfully contained the virus for much of the pandemic last year and early this year. It was one of the world's top success stories.

Prior to the current wave, the country's total caseloads stood at only 3,000 cases with 35 deaths since the pandemic emerged in early 2020. The number of cases was so few that the country was able to assign a number to every single case, such as patient 1,234, for example.

The number of cases and deaths recorded in the country of nearly 100 million seemed almost too good to be true to the rest of the world, including developed countries with advanced public healthcare systems. But it was indeed the reality.

The country was praised by the international community for dealing with the outbreak with its strict quarantine methods, contact tracing, and stringent localised lockdowns.

However, things have changed as the spike in cases caused by the highly contagious Delta variant since late April has caused daily cases to repeatedly hit new highs.

The country yesterday recorded an additional 7,594 cases, bringing the total number of cases to 128,413 cases, with 863 deaths.

HCM City has recorded more than 80,000 locally transmitted cases since the fourth wave that began in late April.

As a city resident, I can see that the whole country, especially the epicentre HCM City, began taking strong yet flexible measures beginning in late May.

The largest city in the country has imposed the toughest movement restrictions so far, including banning people from going out from 6pm to 6am beginning on July 26, following two weeks of a lockdown and more than a month of social distancing.

The city administration attributed the tough orders to the risks posed by the highly transmissible Delta variant, which was first found in India last October and has spread to hundreds of countries.

HCM City Party Secretary Nguyễn Văn Nên has apologised to all citizens for any inconveniences caused by the recent measures.

He said he was fully aware of the impact on millions of citizens but "the city administration has no choice. The safety of its residents is the top priority."

Instead of complaining, I think people should find a way to adjust and cooperate with the government to help contain the virus so that life can return to the "new normal" as soon as possible.

Elsewhere in the world, Australia, for example, which was also one of the most successful countries in combating the pandemic, has also had to recently impose strict lockdown measures, following a spike in cases in Sydney due to the Delta variant, according to Reuters.

"You only get one chance to go hard and go fast," Victoria Premier Daniel Andrews was quoted by Reuters as saying during a televised news conference. "If you wait, if you hesitate, if you doubt, then you will always be looking back wishing you had done more earlier. I am not prepared to avoid a five-day lockdown now only to find ourselves in a five-week or a five-month lockdown."

It is understandable that the restrictions have caused frustration among residents suffering from "pandemic fatigue", including myself and especially people like vendors who are no longer able to sell their goods or produce from their stalls in markets or on the streets.

Supply chains have also been seriously disrupted as city authorities have required workers and truckers arriving from HCM City to be tested for Covid-19 before they could pass through to other provinces.

Nguyễn Nguyên Phương, deputy director of the city Department of Industry and Trade, said the closure of many traditional markets was affecting struggling residents who usually buy their food daily.

To prevent a disruption in the supply of goods, especially food, the department has told modern retail outlets and firms participating in the price stabilisation programme to increase supply to compensate for the temporary closure of markets.

It has set up around 3,000 price-stabilisation points in supermarkets, convenience stores and 388 mobile sales points in city districts and Thủ Đức City.

It has also worked with suppliers to organise mobile price-stabilisation sales points to help the poor and disadvantaged, as well as people living in quarantined and locked-down areas.

In addition, the department is issuing grocery cards and numbered tickets to limit the number of shoppers inside traditional markets.

The city will also pilot a plan in which only two to 10 small traders of fruit and vegetables will sell at traditional markets or will take turns if many small businesses want to reopen at the same time.

Several bus companies that are now unable to transport passengers due to lockdown measures have begun to use their vehicles to sell vegetables and other essential goods to city residents.

The express ships were originally meant to transport passengers, but chairs were taken out so that goods can be transported. Each ship can make two return trips every day, and more ships can be registered if needed.

To ensure smooth flow of goods on the roads, the ministry has ordered the transport departments of HCM City and all provinces to ensure the circulation of essential goods, while the ministries of Industry and Trade, and Agriculture and Rural Development, will maintain supply chains during the lockdown period.

To reduce congestion at checkpoints, Minister of Transport Nguyễn Văn Thể has eliminated the testing requirement for drivers transporting essential goods within 19 southern provinces as long as they strictly comply with prevention measures.

The city is also considering reopening traditional markets as its three largest wholesale markets have been closed.

The most vulnerable people in the city, such as the poor, lottery ticket sellers and vendors, have been hit hardest by the strict lockdown measures. Some have been heard to say that they fear they could die of starvation before dying from the pandemic.

In Việt Nam, many individuals and charity organisations have ensured that no one goes hungry. They are offering free supplies of rice and other essential goods to people affected by the pandemic.

Lê Thị Dần, 72, of the city's District 5, whose family has 12 members, said: "District authorities gave rice and instant noodles to us a couple of times and our neighbours gave us five kilogrammes of rice."

"We are very grateful," she said.

In addition, dozens of so-called zero-đồng markets have been set up by the Red Cross and others to help the poor and those who have lost jobs during the pandemic.

Despite these helpful measures, experts have said that only vaccinations can bring life back to normal. That's why Việt Nam early this month started its nationwide COVID-19 vaccination drive, targeting people aged 18 and above.

The Government is making every effort to acquire vaccines amid a global vaccine shortage. It has also allowed businesses to join in the effort to seek vaccine sources with government approval.

The country so far has secured 105 million vaccine doses for 2021 and is working to acquire 150 million doses, with the aim of achieving herd immunity by April 2022.

The COVID-19 vaccine fund has also attracted great support from people, organisations and companies both at home and abroad.

It has so far received donations worth more than VNĐ8 trillion (US$348 million), which is being spent on purchasing vaccines.

Prime Minister Phạm Minh Chính has said that vaccinations will be distributed in a fair, equal, open, transparent, flexible and effective manner.

Many of the available vaccines now are prioritised for HCM City and nearby provinces where the situation is worsening.

HCM City on July 22 started its fifth phase of its vaccination drive, with 930,000 doses expected to be administered.

Frontline health workers and non-medical personnel who may have been exposed to COVID-19 patients, police, and military personnel will be the first to get vaccines in HCM City.

According to the Ministry of Foreign Affairs, the vaccinations will be carried out in accordance with the Government's guidance on COVID-19 vaccine purchase and use, and there will be no discrimination against foreigners living and working in Việt Nam.

Other priority groups for vaccination include the elderly and those who are about to go abroad to study or work.

Residents in HCM City can now register for vaccination on the website of the ward authorities in their districts.

I believe each country has its own challenges in the fight against the virus and each resident plays a major role in the fight. For what the Government and Vietnamese people have done so far, I still believe that the country remains highly proactive and worthy of praise in its fight against the pandemic. — VNS

Việt Nam ensures people’s livelihoods, fair distribution of vaccines have 1814 words, post on vietnamnews.vn at July 30, 2021. This is cached page on VietNam Breaking News. If you want remove this page, please contact us.