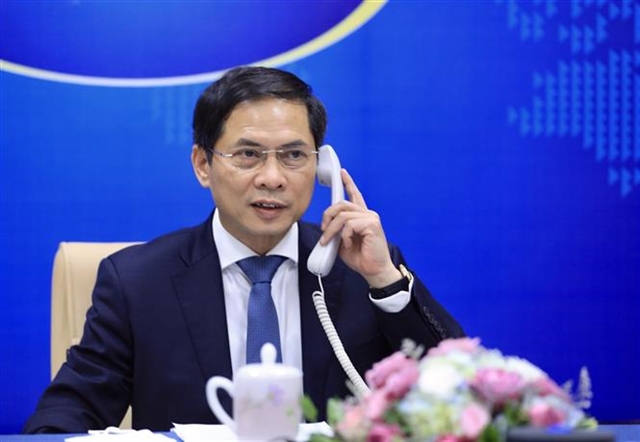 During the phone conversation, Minister Jean Yves Le Drian said he highly appreciated the important developments in the Việt Nam-France strategic partnership, emphasising that Việt Nam is one of the leading partners in French policy within the Indo-Pacific region.

Minister Le Drian also said he highly appreciated Việt Nam’s achievements in recent years, both in responding to the COVID-19 pandemic and socio-economic development. At the same time, he thanked Việt Nam for having created favourable conditions for France to bring in vaccines and vaccinate the French community living and working in Việt Nam.

Minister Le Drian affirmed that he would work to promote the supply of vaccines to Việt Nam as soon as possible through the COVAX mechanism.

Regarding Việt Nam's proposal on the EU removing the IUU fishing warning yellow card, the French Minister noted that Việt Nam has made a notable effort in this field and believes that the European Commission will soon remove the IUU yellow card for the country.

For his part, Minister Bùi Thanh Sơn emphasised the need to maintain bilateral activities in the context of the pandemic. He asked the two sides to coordinate in implementing existing cooperation and dialogue mechanisms in the fields of diplomacy, economy, and national defence.

Minister Sơn also asked France to support Việt Nam in accessing and transferring technology for the production of vaccines and medical equipment in the face of the rapidly developing COVID-19 pandemic.

The two Ministers highly appreciated the close coordination and mutual support at multilateral forums such as the United Nations and ASEAN-EU cooperation, especially when Việt Nam held the ASEAN Chairmanship in 2020 and as a non-permanent member of United Nations Security Council 2020-2021. — VNS

Việt Nam asks for France's support in accessing and producing vaccines have 507 words, post on vietnamnews.vn at July 23, 2021. This is cached page on VietNam Breaking News. If you want remove this page, please contact us.