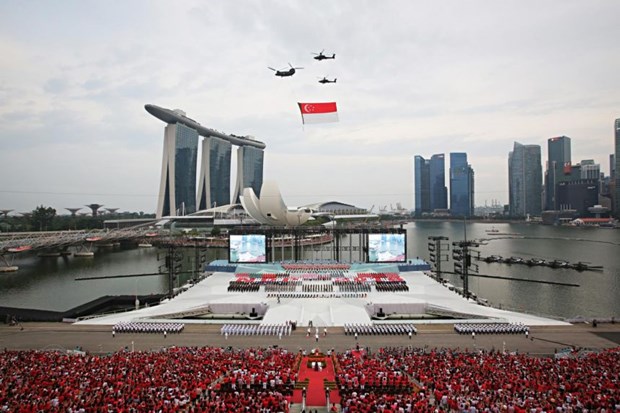 Singapore (VNA) – Singapore 's National Day Parade (NDP) this year will be postponed to August 21 after the end of the latest COVID-19 restrictions, the Ministry of Defence (Mindef) said on July 22.

The announcement came as Singapore reverted to stricter preventive measures against the pandemic, which are scheduled to last until August 18, after the National Day (August 9).

The heartland fireworks and Red Lions displays previously announced to be held on August 7 and 8 will be cancelled. The NDP rehearsal previously planned for July 24 and the preview on July 31 have also been postponed, said Mindef.

Last month, Mindef announced that the parade will return to The [email protected] Bay on August 9 on a smaller scale compared with pre-pandemic years. There would be fewer spectators and participants than usual and all of them must also be fully vaccinated.

A total of 162 new locally transmitted COVID-19 infections were reported in Singapore on July 22, including 52 new infections not linked to previous cases. The Southeast Asian country has so far confirmed 63,791 cases./.

Singapore postpones National Day Parade over COVID-19 concerns have 344 words, post on en.vietnamplus.vn at July 23, 2021. This is cached page on VietNam Breaking News. If you want remove this page, please contact us.