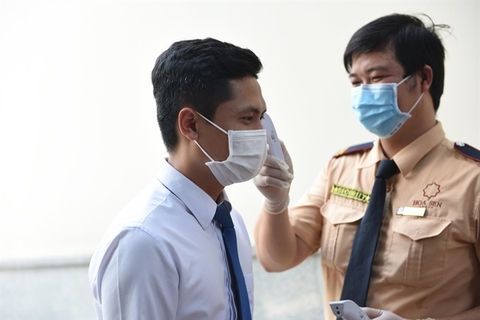 A security guard of the Hoa Sen Group (HSG) measures the body temperature of an employee. HSG rose 2.8 per cent on Thursday. — Photo hoasengroup.vn

Vietnamese shares rose for four straight days on Thursday, bolstered by a significant injection of cash flow into banking and steel stocks, pushing up indices.

The southern market index has risen a total of two per cent in the last four days.

The market’s breadth was positive with 251 stocks increasing while 134 declined.

Nearly VND16.3 trillion (US$713 million) was poured into the southern market, equivalent to a trading volume of more than 491 million shares.

"After a boom in the first half of 2021, market liquidity has been falling sharply since the beginning of July, even as HoSE solved the problem of system overloading," said news site cafef.vn.

"The recent sharp decline in market liquidity may come from the fear about the complexity of the COVID-19 pandemic. Investors tend to wait for more positive signs before they return to the market," it said.

"The current trading value of VND15 trillion to VND17 trillion is more reasonable," he said.

The VN30-Index, which tracks 30 biggest stocks on the southern bourse, witnessed an increase of 1.42 per cent to close Thursday at 1,427.55 points. Of the VN30 basket, 23 stocks climbed while four slid.

More than 87.6 million shares were traded on the northern exchange, worth VND2.2 trillion. — VNS

Shares record four-day gains on bank, steel stocks have 424 words, post on bizhub.vn at July 30, 2021. This is cached page on VietNam Breaking News. If you want remove this page, please contact us.