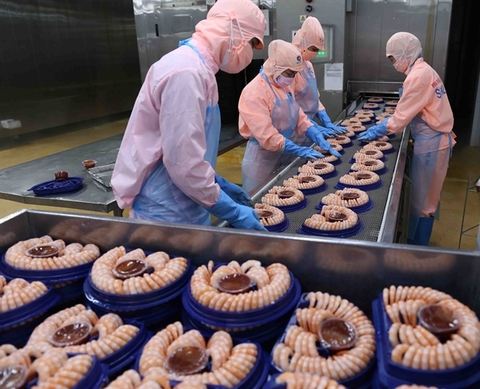 The Viet Nam Association of Seafood Exporters and Producers (VASEP) has said it will be difficult for seafood producers that export to the EU to maintain growth in the second half of this year.

It is estimated that seafood exports to the EU in the second half of the year will reach about US$600 million, with year-on-year growth of 8 per cent.

Customs statistics showed that Viet Nam’s seafood exports to the EU market in the first six months of this year increased by 20 per cent to over $486 million.

VASEP said EU economies are recovering thanks to positive changes after the anti-Covid vaccination programme and post-Covid support packages.

The demand for seafood imports in the EU market started to increase strongly from March and is expected to continue to prosper in the second half of the year.

Viet Nam could seize the opportunity to boost exports to this market if it quickly controls the outbreak of COVID-19 in HCM City and other Mekong Delta provinces.

However, with the current situation of the pandemic and the IUU yellow card issue seafood exporters will have difficulty exporting to the EU in the second half of the year.

The limited source of marine fish, along with regulations on the certification of raw materials caught in accordance with EU’s IUU regulations, make it more difficult for marine fish to be exported to the EU.

The EU is currently Viet Nam’s fourth-largest seafood export market, after the US, Japan and China, accounting for over 11 per cent of seafood sold overseas.

The Netherlands, Germany, Belgium, and Italy, are the main markets for Viet Nam’s shrimp and tuna.— VNS

Seafood exporters to EU to face challenges in second half of year have 429 words, post on bizhub.vn at July 24, 2021. This is cached page on VietNam Breaking News. If you want remove this page, please contact us.