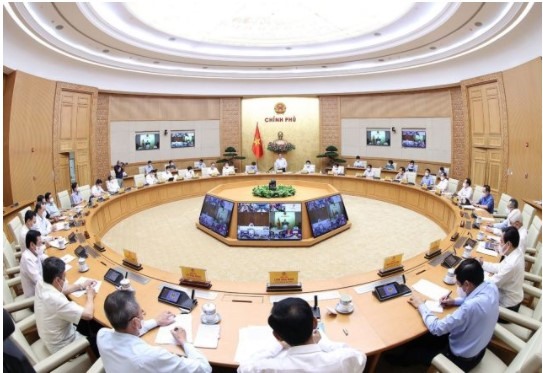 An overview of the working session. VNA/VNS Photo Dương Giang

HÀ NỘI — Prime Minister Phạm Minh Chính has directed the development and production of home-grown vaccines to move faster, but has said their safety and efficacy must be ensured.

He gave the direction during a working session with leaders of ministries, vaccine producers and scientists called to discuss the research and production of COVID-19 vaccines in Hà Nội on July 23.

Speaking at the event, Chính stressed that Việt Nam is rolling out a "vaccine strategy", including importing, studying, facilitating vaccine production technology transfer and producing home-grown vaccines along with vaccinating the whole population for free.

In particular, research, technology transfer and domestic production of vaccines are very important parts of the vaccine strategy that will allow the country to be independent of foreign suppliers.

In the past, the Government and the Prime Minister have focused on this via meetings and surveys, and have been providing encouragement for units that are conducting research, technology transfers, testing, and going forward in the production of a domestic vaccine.

The PM emphasised the need to follow proper protocols and procedures regarding the matter.

The Ministry of Health, the Ministry of Science and Technology, and the Government Office have been responsible for monitoring the progress of the vaccine.

The Health Ministry reported that Nanocovax, produced by the Nanogen Pharmaceutical Biotechnology JSC and Covivac by the Institute of Vaccines and Medical Biologicals, are currently undergoing clinical trials.

For Nanocovax, the first shots, in the third phase, were given to 13,007 volunteers. This phase is scheduled to be completed by August 15.

The Ministry of Health has sent a team of domestic experts to coordinate with WHO experts to support the manufacturing and the research teams (HCM City Pasteur Institute – Military Medical Academy) to complete a research dossier. This will be submitted to the evaluation boards between August 15 and 20.

The COVIVAX vaccine, being researched and produced by the Institute of Vaccines and Medical Biologicals, is expected to enter phase three in September 2021.

VinGroup Corporation has also been negotiating with the US's Acturus Company. It is expected that in August 2021, clinical trials will start in Việt Nam. The production factory is expected to have a capacity of 100 to 200 million doses per year when completed.

International Progress Joint Stock Company (AIC) and the Company for Vaccine and Biological Production No.1 (VABITOECH) have also signed an agreement with Shionogi Company (Japan), and are preparing to start phase three clinical trials in Việt Nam as well as technology transfer for vaccine production. It is expected that in June 2022, the vaccine will be on the market.

VABIOTECH and DS-Bio Company have also signed an agreement with Russia’s sovereign wealth fund Russian Direct Investment Fund (RDIF) on bottling and packaging the Sputnik V vaccine. It is expected that by August 10, 2021, the test results will be available, and then production can commence. They expect to have an output of five million doses per month.

If the planned transfer of production technology goes ahead they may reach production capacity of 100 million doses per year.

It is expected that later this month, WHO experts will come to Việt Nam to support the Ministry of Health to evaluate domestically produced vaccines as well as the technology-transferred vaccines both online and in-person.

Special attention and priority should be given to the production of vaccines in the country as soon as possible, based on scientific principles. He also said the safety of the people must be ensured first and foremost.

The Ministry of Health will immediately issue regulations and guidelines on procedures, criteria, conditions and standards for domestic vaccine production.

The Ministry of Health, the Ministry of Science and Technology, and relevant ministries and agencies are in charge of carrying out specific plans to provide the maximum amount of support possible to manufacturers in assessing the quality of their vaccines.

The Ministry of Finance shall assume the prime responsibility for setting out the standards and conditions for receiving funding support for research, testing and vaccine production, fairly and transparently.

“We must definitely put the interests of the people and the nation first,” Chính said. — VNS

PM: home-grown vaccines must ensure safety, efficacy have 887 words, post on vietnamnews.vn at July 24, 2021. This is cached page on VietNam Breaking News. If you want remove this page, please contact us.