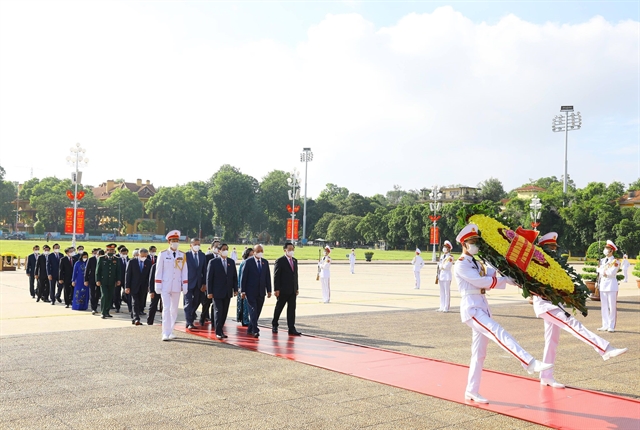 HÀ NỘI – Care and support for war invalids, wounded veterans, martyrs' relatives and contributors to the revolution is not only a consistent policy but also a grateful tradition of Việt Nam, National Assembly chairman Vương Đình Huệ said Tuesday.

It was late President Hồ Chí Minh who first initiated the celebration on July 27, 1947, to remember war martyrs, invalids and their families. The day, initially called “Nation-wide Invalids Day,” expresses the nation's gratitude for those who fought for national independence.

The NA chairman said that on behalf of the National Assembly, he sent his warm regards, deep affection and deepest gratitude to the revolutionary veteran comrades, the Vietnamese Heroic Mothers, the heroes of the People’s Armed Forces, the heroes of labour and war invalids and the relatives of martyrs and people who had made great contributions to the revolution throughout the country.

Huệ also sent his best wishes for the health of NA deputies who are war invalids and family members of martyrs and those who contributed to national defence and construction.

Huệ added that in recent years, the Party, State, Government, Việt Nam Fatherland Front, organisations and individuals, had practically helped improve living conditions of war invalids and families of martyrs and those who had put the needs of the country ahead of themselves.

The NA chairman said that he was moved and appreciated their efforts to overcome the challenges they were faced with to pursue a better life and to join national defence and development.

He said he was sorry to see many war invalids and martyrs' families facing difficulties, especially those that had family members and loved ones that had not been found. This, he said, caused unhealed wounds to their mothers, wives and family members.

"More than ever, now is the time for further efforts to be made to support war invalids and families of martyrs and those who contribute to the country practically, comprehensively and effectively to ensure their living conditions are the same or even better than the national average," Huệ said.

"The implementation of support policies for them is not only a political responsibility but also helps ensure social equality, contributes to national unity and increases public confidence in the Party and the State," he said.

"The National Assembly and its deputies need to improve their performance, especially in completing legal framework and incentive policies for war invalids and families of martyrs and those who contribute to the country," he said, adding that the NA would also closely supervise the implementation of such policies.

Currently, more than 9.2 million people who rendered services to the nation have benefited from support policies, while thousands of Heroic Vietnamese Mothers are cared for by society. – VNS

Further support needed for war invalids and martyrs' families: NA chairman have 686 words, post on vietnamnews.vn at July 27, 2021. This is cached page on VietNam Breaking News. If you want remove this page, please contact us.