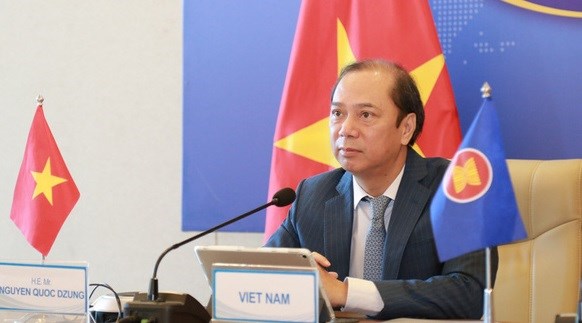 At the events, the Vietnam ese official affirmed the support for Brunei’s priorities and initiatives in 2021, and proposed directions to speed up the implementation of Vietnam’s initiatives put forth in the ASEAN Chairmanship Year 2020.

He also voiced important ideas on directions for handling issues relating to the relations between ASEAN and its partners on the basis of ensuring the association's central role.

Dung updated participants on the progress of completing the Memorandum of Understanding on activities related to SEANWFZ.

Regarding international and regional issues, Dung called on ASEAN countries to continue maintaining consistent principles and approaches in the East Sea issue in the context of recent complicated developments in the waters, and creating a favourable environment for substantive negotiations in order to soon achieve an effective and substantive Code of Conduct in the East Sea (COC) in line with international law and the 1982 UN Convention on the Law of the Sea (UNCLOS).

He underlined the urgent need to early implement the "five-point consensus" on Myanmar reached at the ASEAN Leaders’ Meeting on April 24, saying that this directly affects the prestige, image and central role of ASEAN.

The Deputy FM also proposed a number of specific measures to promote intra-bloc efforts in this issue.
At the ASEAN SOM, representatives from ASEAN member countries discussed and agreed on directions to accelerate the implementation of initiatives and priorities proposed by Brunei in 2021, including the the Strategic and Holistic Initiative to Link ASEAN Responses to Emergencies and Disasters (ASEAN SHIELD) to strengthen ASEAN’s synergy to respond to natural disasters; a scholarship programme for young ASEAN cadres; building ASEAN’s common awareness on blue economy.
They also debated the implementation of initiatives proposed by Vietnam as ASEAN Chair 2020.

Meanwhile, at the SEANWFZ ExCom, attendees reaffirmed the importance of the Treaty on the Southeast Asia Nuclear Weapon-Free Zone, saying that this is a key document that demonstrates ASEAN’s commitment to maintaining a Southeast Asia region without nuclear weapons, thus contributing to regional security and international efforts in  disarmament and non-proliferation of weapons of mass destruction./.

Vietnam attends ASEAN SOM, ExCom SEANWFZ’s meeting have 556 words, post on en.vietnamplus.vn at June 21, 2021. This is cached page on VietNam Breaking News. If you want remove this page, please contact us.