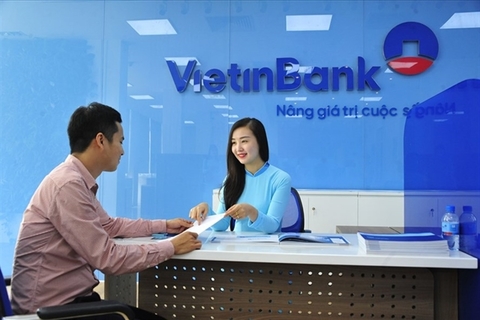 A Vietinbank employee talking to a customer. The bank shares continue to climb on Monday morning after hitting the biggest daily gain last session. — Photo courtesy of Vietinbank

Vietnam Joint Stock Commercial Bank for Industry and Trade (Vietinbank, CTG) said that the State Bank of Viet Nam (SBV) has approved an increase in capital by paying dividends.

Accordingly, VietinBank received Document No 4142/NHNN-TTGSNH issued on June 11 on the increase of VietinBank’s charter capital.

Of which, SBV allowed VietinBank to increase charter capital from VND37.2 trillion (US$1.6 billion) to over VND48 trillion ($2.1 billion) under the plan of issuing shares to pay dividends from profit after tax.

The bank is continuing to carry out the necessary procedures to distribute stock dividends to shareholders and disclose information in accordance with regulations.

After the announcement, CTG shares hit the maximum daily gain of 7 per cent last Friday and continued to rise on Monday morning. CTG shares are now trading at VND53,200 per share.

Vietinbank approved to increase charter capital through paying dividends have 370 words, post on bizhub.vn at June 14, 2021. This is cached page on VietNam Breaking News. If you want remove this page, please contact us.