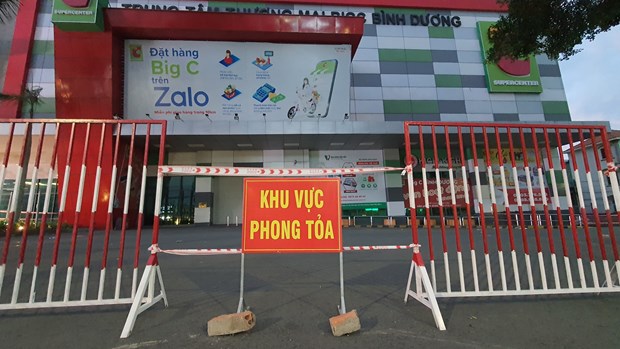 A supermarket in Thu Dau Mot city of Binh Duong province is sealed off on June 19 due to its connection with a COVID-19 patient (Photo: VNA)

Hanoi (VNA) – The treatment section under the National Steering Committee for COVID-19 Prevention and Control on June 20 announced two new deaths from COVID-19-related complications, raising the pandemic death toll in the country to 66.

The latest fatalities are men aged 53 and 80. Both of them were being treated for a number of underlying health conditions .

The 53-year-old, from the northern province of Vinh Phuc, was being treated for non-Hodgkin's lymphoma since September 2020 and had undergone nine chemotherapy sessions at the Tan Trieu facility of the National Cancer Hospital in Hanoi.

He tested positive for COVID-19 while at the hospital and was transferred to the National Hospital for Tropical Diseases in Hanoi where his conditions worsened resulted in his death in the early morning of June 19.

His cause of death is recorded as septic shock, pneumonia, COVID-19 in patients with treatment-resistant non-Hodgkin's lymphoma, hypertension, and renal failure.

The second patient, from the northern city of Bac Ninh, also died on the same day. He had a history of hypertension, kidney failure and asthma.

The 80-year-old man tested positive for COVID-19 on May 25 and was moved from Bac Ninh Provincial General Hospital to the National Hospital for Tropical Diseases .

The condition of his lungs rapidly deteriorated and due to his advanced age and weak health, he did not respond to treatment.

His cause of death has been noted as multi-organ failure, pneumonia caused by SARS-CoV-2 in patients with renal failure, hypertension, heart failure and bronchial asthma.

The two new deaths brought the COVID-19 casualties in the fourth wave of infections (since late April) to 31./.

Two more die of COVID-19-related complications have 407 words, post on en.vietnamplus.vn at June 20, 2021. This is cached page on VietNam Breaking News. If you want remove this page, please contact us.