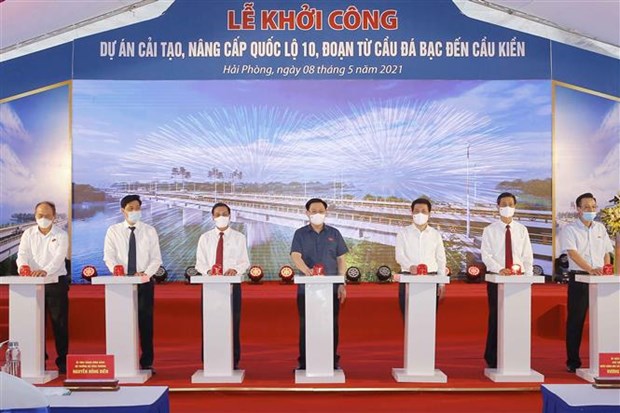 Chairman of the National Assembly Vuong Dinh Hue (centre) attends the ground-breaking ceremony of a project on upgrading 13.4 km of the National Highway 10 in the northern city of Hai Phong on May 8 afternoon. (Photo: VNA)

Hai Phong (VNA) – Chairman of the National Assembly Vuong Dinh Hue and his entourage attended the ground-breaking ceremony of a project on upgrading 13.4 km of the National Highway 10 in the northern city of Hai Phong on May 8 afternoon.

The upgrade of the section spanning from Da Bac to Kien bridges has a total investment of 1.22 trillion VND (53.3 million USD) funded by the local budget.

The stretch will be expanded to six lanes, allowing a maximum speed of 80km per hour. Scheduled to finish in September 2022, the project is expected to help ease congestion during peak hours and prevent traffic accidents on the route.

More than 1,000 households have been relocated to make way for the project.

Previously, a 30-km section of the expressway from Quan Toan to Nghin Bridges has been upgraded and put into operation.

Later the same day, Hue visited and offered incense at the memorial house dedicated to Nguyen Duc Canh, an outstanding student of President Ho Chi Minh and a co-founder of the Communist Party of Vietnam. He was also the founder of the Tong Cong Hoi Do Bac Ky (Red Workers’ General Union in Northern Vietnam), the predecessor of the Vietnam General Confederation of Labour, and the first Secretary of the Hai Phong Party Committee./. 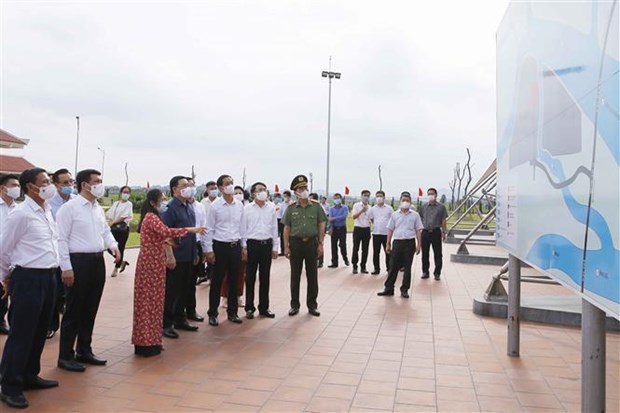 Top legislator attends ground-breaking of national highway upgrade in Hai Phong have 376 words, post on en.vietnamplus.vn at May 9, 2021. This is cached page on VietNam Breaking News. If you want remove this page, please contact us.