Rap music has been dominating the Vietnamese music industry this year, with the continued success of rap artists and projects.

Đen Vâu, one of the most successful rappers in Việt Nam, set a record for the most popular Vietnamese music videos ranking No 1 in trending on YouTube in Việt Nam.

His new music video Trốn Tìm (Hide and Seek), which ranked No 1 in trending 26 hours after its release, helped the artist achieve 11 music videos in the top 1 trending.

The music video featuring MTV, one of the most popular Vietnamese boy bands in the 1990s, quickly became a phenomenon on social media.

It earned more than 28 million views when it was released on the singer's birthday on May 13.

The song Trốn Tìm has meaningful lyrics about love and life, combined with nostalgic melody.

"I have never spent so much time in the studio for such a rap song. After dozens of hours a week in the studio, I finally felt confident because I didn’t take it lightly," he said.

The song has received praise from listeners across the country.

Nguyễn Quang Duy, 30, a resident in Đồng Nai Province, said he was surprised at the first collaboration between Đen Vâu and MTV band, and their emotion and harmony in the song.

" Trốn Tìm brings me back to beautiful memories of my growing up," Duy said.

Đen Vâu, whose real name is Nguyễn Đức Cường, was born in Hạ Long City in Quảng Ninh Province. He wrote his first rap lyrics when he was at school.

He won the Bài Hát Việt (Vietnamese Songs) award in 2011 with the song Cây Bàng (Bàng Tree), but rose to fame with the song Đưa Nhau Đi Trốn (Escape Together) released on YouTube in September 2015.

In 2018, he released Anh Đếch Cần Gì Ngoài Em (I Need Nothing but You) , about the challenges and difficulties that urban youth face today.

The song helped him win best underground male singer and most impressive singer, at the We Choice Awards 2018 given by Zing, a social network in Việt Nam.

He was a nominee for Best Impressive Singer at VTV Awards 2019 on Việt Nam Television.

"I want to give thanks to my fans who have supported my career," said Đen Vâu. 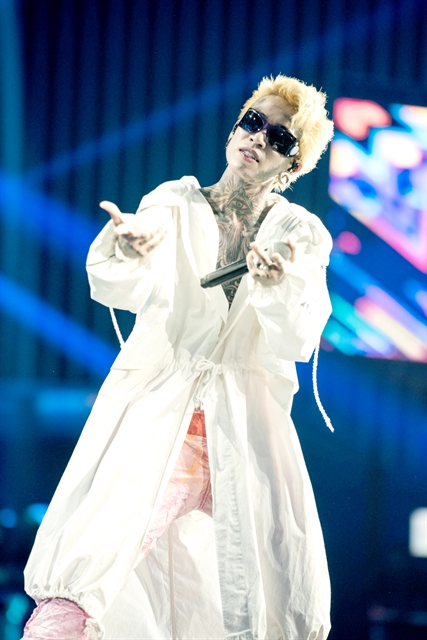 Dế Choắt, winner of Rap Việt 2020, performs at the Rap Việt All-Star Concert 2021 in HCM City in April. Photo courtesy of the producer

Rap Việt, a reality TV music show based on a Thai show called The Rapper , has quickly become the most favourite show in Việt Nam since it first appeared in May 2020.

Its first live concert, Rap Việt All-Star 2021, earned 55 million views 72 hours after its premiere at 8pm on May 22 on streaming platform VieON.

The show was held on April 10 at the Sài Gòn Exhibition and Convention Centre in HCM City's District 7, attracting an audience of 10,000.

Chouu Nguyễn, a VieON user said: "The concert was incredible. I watched the show live, but I still feel excited watching it again."

Along with the concert, the 16-episode Rap Việt set a record as the most-viewed TV show in Việt Nam in 2020, attracting more than 576,000 concurrent viewers for its second episode.

Each episode of Rap Việt has earned 15-25 million views on YouTube.

The programme was named the Music Programme of the Year, while its producer Hoàng Touliver received the Producer of the Year award.

Touliver, 34, has been involved in the electronic music scene since 2007. He has produced famous beats such as Tell Me Why and Hoa Sữa (Milky Flower).

He has worked with Space Speakers to launch several music shows in Hà Nội and HCM City, like Drop Da Bass, SpaceBass and Space Jam.

He released his first album SBNSL (Spaceboys Neva Sleep) in 2013, and has performed at big music events in Việt Nam, such as Prisma Run, Monsoon Festival 2014, and Yamaha Countdown 2015.

"Thanks to the success of Rap Việt, rap music is widely known in Việt Nam. And people have more understanding about the underground music community," said Dế Choắt, who is also well-known as a tattoo artist. VNS

Rap dominates Việt Nam's music industry have 1060 words, post on vietnamnews.vn at June 13, 2021. This is cached page on VietNam Breaking News. If you want remove this page, please contact us.