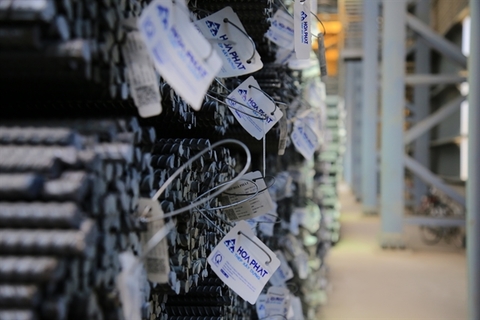 On the Shanghai Futures exchange, the HRC for August delivery was quoted at yuan 5,514 per tonne (US$861.38 per tonne) on Tuesday.

VDSC believes that Hoa Phat will not face any difficulties in consuming all output despite the selling price tending to be higher than that of some Chinese factories.

Currently, India’s HRC supply is weakened due to the pandemic, causing higher export prices. As a result, domestic galvanised steel sheet manufacturers are short of cheap imports to meet the demand from the export market, allowing Hoa Phat to maintain production capacity and high selling prices.

VDSC expects Hoa Phat to sell about 690,000 tonnes of HRC (both internal and external) in the third quarter, up about 4 per cent compared to same period last year. However, the gross profit margin of the construction steel segment may decrease due to weak demand and increased production costs.

Construction steel sales declined in May to 320,000 tonnes after a surge in March and April. Of which, the proportion of export volume rose from 17 per cent in the first four months of 2021 to 21.6 per cent in May.

Besides large inventories of retailers, rising selling prices and relatively weak domestic demand were the main reasons that the company could not maintain high sales as it did in March and April.

Hoa Phat can reduce the selling price of construction steel in the coming months to maintain sales, leading to a decrease in gross margin in the second half of the year, VDSC added.

Due to the upcoming rainy season, steel demand from construction activities in the third quarter is likely to be weaker than in the second quarter. Thus, the company has started to reduce selling prices by VND500 – 800 per kilo from the beginning of June to boost sales.

Currently, the cost of electric furnace manufacturers is still higher than that of Hoa Phat. The company can gain more market share by reducing selling prices, the securities firm said.

On the stock market, HPG shares, which are listed on the Ho Chi Minh Stock Exchange (HoSE), closed yesterday’s trade at VND53,200 per share. — VNS

Hoa Phat expected to gain more than $445 million in Q2: VDSC have 613 words, post on bizhub.vn at June 15, 2021. This is cached page on VietNam Breaking News. If you want remove this page, please contact us.