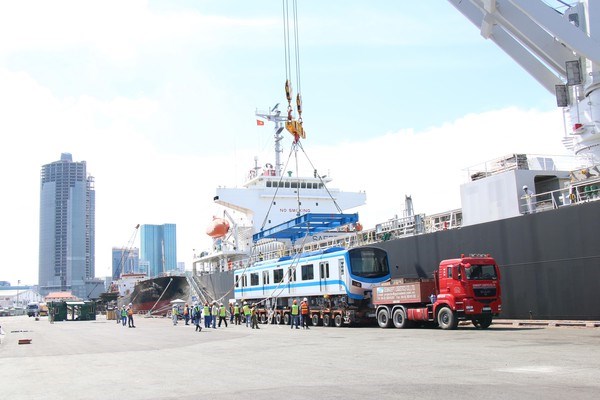 One of six carriages for HCM City’s Metro Line No 1 arrives on June 20. Five out of the total 17 trains for the line have now been received, following previous deliveries that began in October last year. – VNA/VNS Photo

HCM CITY – HCM City now has five out of its planned 17 trains for Metro Line No 1, after six carriages for two trains arrived on Sunday from Japan.

The train carriages from Japan arrived at Khánh Hội Port in District 4 on Sunday. On Monday morning, one three-carriage train was transported to Long Bình Depot in Thủ Đức City by road for assembly and testing. The other train will be transported to the site on Wednesday.

The city is importing a total of 17 trains for its Metro Line No 1 from Japan. It began importing the trains last October, with two three-carriage trains arriving on May 10.

The Management Authority for Urban Railways of HCM City finalised the train's design based on public feedback gathered a few years ago when a life-size model of a metro train was exhibited at Long Bình Depot.

The VNĐ43.757 trillion (US$1.9 billion) route, from Bến Thành Market in District 1 and Suối Tiên Theme Park in District 9, is 19.7km long and will have 14 stations, three of them underground.

It was built using official development assistance (ODA) and funds from the Japan International Cooperation Agency.

Nearly 86 per cent of the work on the line has been completed. The metro line is the first of eight metro lines to be built in the city and aims to ease traffic congestion.

HCM City originally planned for the metro line No 1 to begin operating by the end of this year, but it has been delayed until next year due to the COVID-19 pandemic.

Since construction began in 2012, the line has faced numerous problems such as slow fund disbursement and staff turnover, and has had to be delayed many times. – VNS

HCM City receives more trains for Metro Line No 1 have 446 words, post on vietnamnews.vn at June 21, 2021. This is cached page on VietNam Breaking News. If you want remove this page, please contact us.