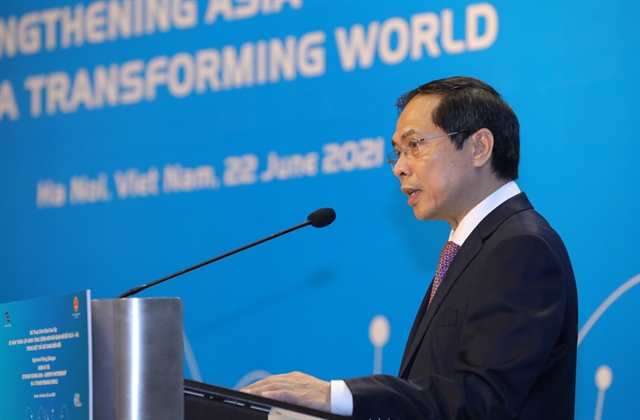 The dialogue is an initiative of Việt Nam to mark the 25th anniversary of ASEM foundation (1996-2021) and is one of the most important activities of the forum in 2021, serving as an important opportunity for members to discuss the development orientation and vision of the Asia-Europe Partnership in the new period.

The outcome will be an important contribution to the 13th ASEM Summit scheduled to be held on November 25-26 in Cambodia.

In his remarks, Vietnamese foreign minister Sơn lauded the remarkable achievements and progress of the partnership over the past 25 years and affirmed that Asia-Europe cooperation continued to be a top priority in Việt Nam's foreign policy.

“The world is witnessing a profound transformation in all aspects as a result of scientific and technological breakthroughs, geo-economic and geopolitical shifts, the emergence of new, complex, inter-related traditional and non-traditional security challenges, and the impact of COVID-19,” Sơn said.

The minister also pointed to numerous hurdles standing in the way of international cooperation, including protectionism, unilateralism, and behaviours that erode international law.

“In such a rapidly changing and complex world, the Asia-Europe Partnership is more important than ever,” he said, stressing that it was "indispensable to the world's stability and prosperity".

It was high time for ASEM to devise a new vision to create new drivers and vitality, and carve out for a befitting role in the evolving regional and global architecture, the minister said.

He called on the member countries to demonstrate stronger resolve, take bolder actions, and choose an appropriate path to move forward so that ASEM would reap more success.

It was important for ASEM to prioritise areas that meet the development needs of its member countries, pay due attention to confidence-building measures, and contribute through concrete actions to the global restructuring process towards inclusive and sustainable development, Sơn suggested.

To this end, he proposed three major objectives for ASEM cooperation in the coming decades, comprising maintaining a favourable international environment of peace, stability, dialogue and trust; playing a leading role and making greater efforts to enhance sustainable and inclusive development; and laying a solid foundation for sustainable, enduring, and mutually beneficial economic ties between Asia and Europe.

South Korean, Singaporean, and the UK foreign ministers are all participating in-person.

The delegates shared the view on the significance of the partnership, especially in a rapidly changing and complex world, and committed to promoting close coordination between the member countries.

Appreciating Việt Nam's initiative, they said the dialogue had contributed to maintaining cooperation, given ASEM's activities disrupted by the pandemic.

They said ASEM needed to have a new cooperation vision to better contribute to peace, security, stability and sustainable development in the two continents and the world while meeting development requirements in the member countries.

They suggested innovation in cooperative activities to bring practical benefits to people.

The dialogue has affirmed Việt Nam's role and contributions to ASEM, as well as joint efforts made by the country and other member nations in building the Asia-Europe partnership. 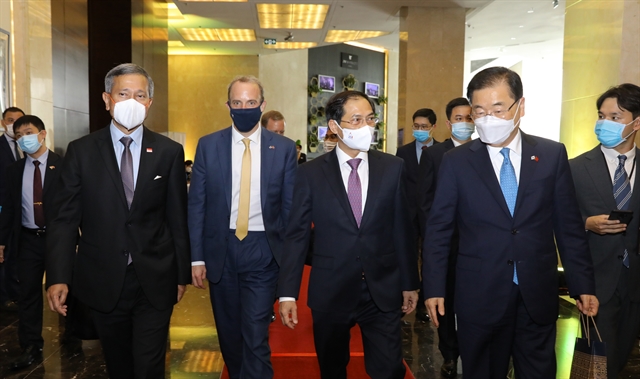 Asia-Europe partnership indispensable for world's stability and prosperity: Foreign minister have 1044 words, post on vietnamnews.vn at June 22, 2021. This is cached page on VietNam Breaking News. If you want remove this page, please contact us.