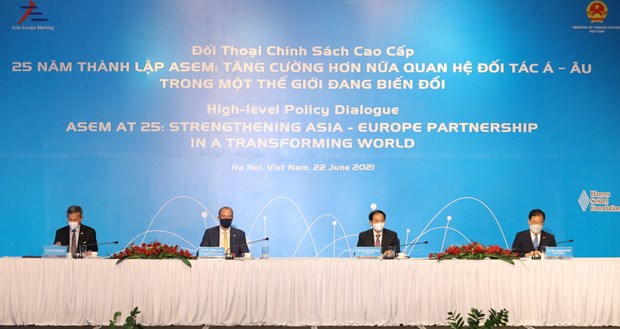 Hanoi (VNA) – The Asia – Europe cooperation will be indispensable and increasingly important in the future, Deputy Minister of Foreign Affairs Nguyen Minh Vu said about the significance of the Asia – Europe Meeting (ASEM) High-level Policy Dialogue held on June 22.

The dialogue, themed “ASEM at 25: Strengthening Asia-Europe Partnership in a Transforming World”, took place in both in-person and videoconference forms in Hanoi under the chair of Vietnamese Minister of Foreign Affairs Bui Thanh Son.

It was held at the initiative of Vietnam on the occasion of ASEM's 25th founding anniversary and also one of the most crucial activities of this forum in 2021.

Deputy Foreign Minister Vu stressed that taking place at a time the world is struggling with the COVID-19 pandemic, the dialogue demonstrated the importance that Vietnam and other countries attach to the Asia – Europe partnership. In particular, it showed some countries, including Vietnam, have gained certain successes in the coronavirus combat and begun returning to normal.

In hosting the event, Vietnam also continues to affirming that it is a safe destination for investment and business activities and that in the country, international cooperation has returned to normal, he remarked.

Vu went on to say that the dialogue provided an important occasion for participants to discuss detailed and substantive measures while sharing experiences and ways for sustainable economic recovery and COVID-19 prevention and control. 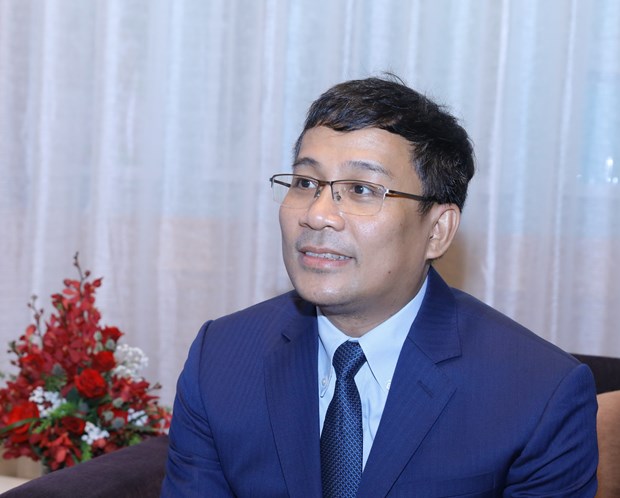 At the event, ASEM also showed itself as a highly dynamic forum and an incubator of new cooperation ideas, the official noted, adding that many speakers shared ideas and visions with a view to turning ASEM into a major driver of global growth and economic connectivity and a highly important part of a green and clean world with sustainable, inclusive, and innovative development that centres on the people, in the next five and 10 years and beyond.

Basing on this, ASEM will bring into play its role around the globe more strongly, shaping a rules-based world order and bringing about peace, stability, prosperity, and happiness to not only the two continents but also the whole world, according to the Deputy Foreign Minister.

Regarding Vietnam's contributions to ASEM, he noted over the last 25 years, since it became a founding member of the forum, Vietnam has pursued the consistent policy of proactively and actively integrating into the world, with active contributions to the forum.

Vietnam has hosted several highest-level ASEM activities, such as the ASEM Summit in 2004 and the ASEM Foreign Ministers' Meeting in 2009.

Vu added Vietnam has also put forth many initiatives for cooperation with other member countries, particularly in developing the digital economy and society and adopting models of green, clean, sustainable, inclusive, and innovative economic development which are the strengths of many developed nations in ASEM.

The Deputy Minister held that the Asia – Europe cooperation will be indispensable and increasingly important in the future in the context of the world confronting the COVID-19 pandemic, which is forecast to linger on for many year; economies recovering but at uneven pace due to different levels of access to vaccines; countries facing huge impacts of climate change and the exhaustion of resources; and digital and scientific – technological revolutions growing strongly around the world.

At the dialogue, the participating ministers also underlined that the ASEM cooperation is necessary for optimising opportunities and dealing with challenges facing the international community, including the Asia – Europe forum, he added./.

Asia - Europe cooperation to be increasingly important: official have 775 words, post on en.vietnamplus.vn at June 23, 2021. This is cached page on VietNam Breaking News. If you want remove this page, please contact us.