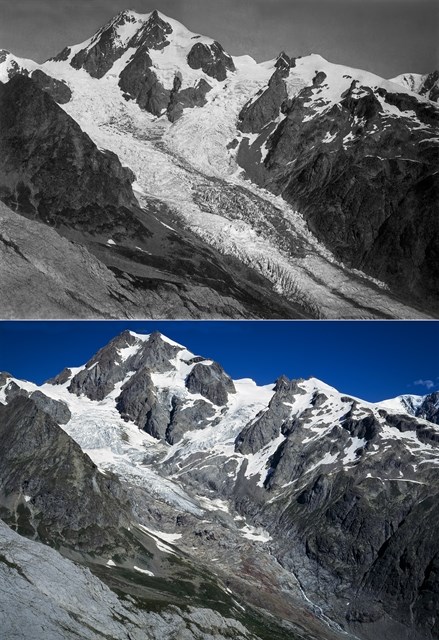 Photos highlight the evolution of the glacial masses, underlining the effects of climate change on the mountain landscape in Italy. Photo courtesy of the organiser

HCM City (VNS/VNA) – The Consulate General of Italy in Ho Chi Minh City on May 20 launched two photo exhibitions on the landscapes of Italy and Vietnam at the HCM City Fine Arts Museum .

The work will head to COP26 co-chaired by the UK and Italy at the end of 2021 in Glasgow, and will be promoted by Italian embassies and consulates around the world.

HCM City and Hanoi were chosen as the first destinations.

The showcase consists of three sections: General Introduction, Italian Mountains, and A Look at the World, featuring 20 landscape images, and 30 other photos.

The highlight of the exhibition is Montagne Italiane (Italian Mountains), an ideal journey to explore the entire Alpine arc from west to east, starting from the Gran Paradiso.

Nine mountains on the journey are also featured to reflect the evolution of the glacial masses, underlining the effects of climate change on the mountain landscape.

In addition, two video recordings of the expedition On the Trails of the Glaciers – Alps 2020 are presented at the event.

The exhibition is based on the project On the Trails of the Glaciers promoted and organised by the non-profit association Macromicro.

It combines photographic comparison and scientific research to show the effects of climate change through the observation of glacier mass variations over 150 years.

Photographer Ventura, specialising in environmental issue , has been involved in the project as its creator and director since 2007.

With a team of researchers, photographers and filmmakers, he has been documenting the phenomenon of the retreat of the world’s largest glaciers and disseminating the results of his work through exhibitions, conferences, educational programmes, installations and documentaries.

Khoa presents works on Son Doong Cave, the world's largest cave, in the central province of Quang Binh.
The exhibitions will be open until June 12 at 97A Pho Duc Chinh street in District 1.

The events will strictly comply with Covid-19 prevention measures, and all attendees are requested to wear a face mask and disinfect their hands with soap and sanitizer./.

Two exhibitions highlight landscapes of Italy, Vietnam have 482 words, post on en.vietnamplus.vn at May 21, 2021. This is cached page on VietNam Breaking News. If you want remove this page, please contact us.