The Council adopted four resolutions and two presidential statements among initiatives put forth by Vietnam. 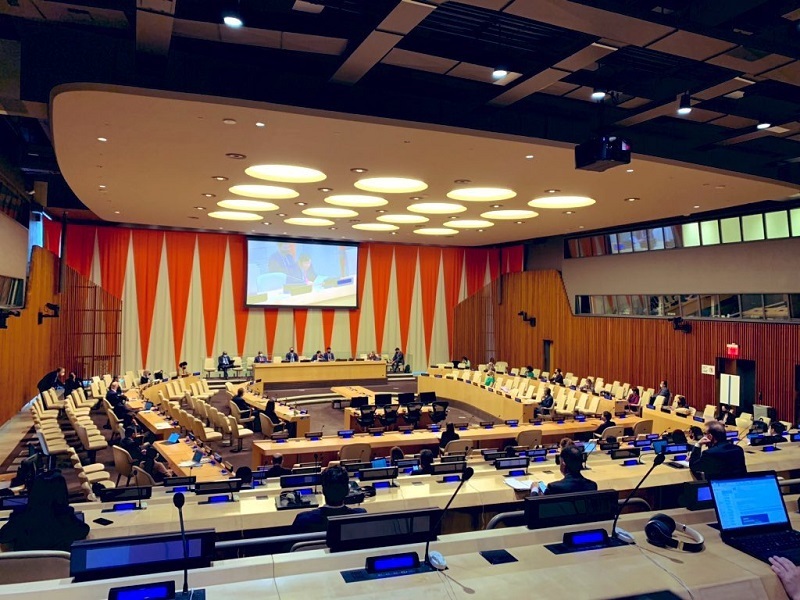 Overview of an UNSC meeting. Photo: Vietnam Mission to UN

Vietnam in the rotating United Nations Security Council (UNSC) Presidency in April chaired four major events that put people at the center to all solutions and towards building and maintaining sustainable peace.

As a result, after the open debates and video teleconferences, the UNSC adopted four resolutions, two presidential statements and five press statements, according to the Vietnam Mission at the UN.

Vietnam completed the UNSC's tight working program with two in-person meetings, nearly 30 ambassador-level meetings and 12 issues of regions around the world for discussion, focusing on an active, proactive and responsible manner; ensuring objectivity and transparency in handling differences among member countries; and maintaining solidarity and consensus to settle the issues.

Of the issues, four topics that caught public attention are "Maintenance of international peace and security: Mine action", "Cooperation between the UN and regional and sub-regional organizations", "Women and peace and security: sexual violence in conflict", and "Critical Infrastructure: the protection of objects indispensable to the survival of the civilian population."

One of Vietnam's priorities during its Security Council term (2020-2021) is the protection of civilians and essential infrastructure in conflict areas, Ambassador Dang Dinh Quy, Permanent Representative of Vietnam to the UN.

The objective of the debate is to consider the current state of the protection of objects indispensable to the survival of the civilian population.

It's obvious that direct or indiscriminate attacks by parties to conflict had damaged or destroyed homes, schools, hospitals, markets, places of worship, and essential civilian infrastructure, such as electrical and water systems.

The latest protection of civilians report also indicated that in many situations of conflict, attacks on schools included the burning of facilities and the destruction of school equipment.

The UNSC's resolution strongly condemns "indiscriminate or disproportionate attacks" that deprive civilians of essential needs and violate international humanitarian law. It demands all parties in armed conflicts comply with these laws and stressed the need to ensure accountability for violations.

The event, which was held under the chair of Vietnam's President Nguyen Xuan Phuc, underscored the need for the UN and regional and sub-regional organizations to enhance their cooperation and develop synergies on early warning, preventive diplomacy and mediation activities.

Another topic is conflict-related sexual violence that concerns the council. Ambassador Quy said the victims should be assisted to access psychological, medical, training and legal services, integrate into the community and seek livelihood sources.

The UN latest report shows that sexual and gender-based violence has spiked globally during the Covid-19 crisis and that conflict-related sexual violence remains a cruel and rampant tactic of war, torture, terror, and political repression.

The 15-member body called for "a scaled-up humanitarian response and unfettered humanitarian access" to address humanitarian needs, including for people in the embattled region who are in need of food assistance.

Geraldine Byrne Nason, Ireland's ambassador to the UN, said "For the first time, this Council speaks with one voice to express its collective concern about the dire humanitarian situation on the ground."

She said the body have paid great attention to humanitarian issues, such as the food crisis, sexual violence against women over the past months but there was a discussion that the UNSC issued a joint statement with a high consensus thanks to Vietnam's presidency.

It can be said that Vietnam not only fulfilled its promise before entering the Security Council, but also opened the door for the next chairmen, she noted.

Wrap-up session for the SC Presidency month of April 2021 drew the attendance of representatives from more than 70 countries.

The UNSC is compose of 15 members, including five permanent members namely China, France, Russian Federation, the UK, and the US, and ten non-permanent members elected for two-year terms by the General Assembly (with end of term year) including Estonia, India, Ireland, Kenya, Mexico, Niger, Norway, Saint Vincent and the Grenadines, Tunisia, and Vietnam.

More than 50 United Nations member states have never been members of the Security Council.

A state which is a member of the UN but not of the Security Council may participate, without a vote, in its discussions when the Council considers that country’s interests are affected.

People-centered approach: Vietnam’s imprint in UN Security Council Presidency have 927 words, post on vietnamnet.vn at May 2, 2021. This is cached page on VietNam Breaking News. If you want remove this page, please contact us.