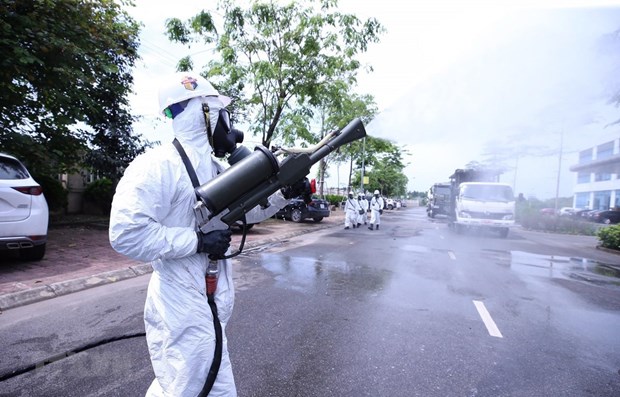 Soldiers disinfecting National Hospital for Tropical Diseases in Hanoi’s Dong Anh district, which is one of the country’s COVID-19 hotspots at present. (Photo: VNA)

Hanoi (VNA) – Vietnam recorded 17 new cases of COVID-19 over the past six hours to 6pm on May 10, including 16 domestically-transmitted infections, the Ministry of Health said.

All of the 16 cases were detected in locked down areas, comprising six in the northern province of Hung Yen, four in the central city of Da Nang, three in northern Bac Giang province, two in Hanoi and one in northern Vinh Phuc province.

The only imported case was sent to quarantine upon her arrival in the central province of Ha Tinh.

As of 6pm on the day, Vietnam counted 2,028 domestic infections and 1,433 imported cases. Since the fourth wave of COVID-19 hit the country on April 27, Vietnam has found 458 cases.

The ministry said a total of 211,016 samples have been collected for COVID-19 testing since April 27.

As many as 59,198 people who had come into close contact with COVID-19 patients or entered Vietnam from pandemic-hit areas are under medical monitoring nationwide.

Also on May 10, 16 patients were given the all-clear, raising the accumulative number of recovered cases to 2,618.

Among the active patients, 25 have tested negative for the coronavirus once, 17 twice and 25 thrice.

Competent agencies on the day issued documents on enhancing the COVID-19 fight at production and business facilities, and industrial parks, and connecting camera systems at State-designated quarantine establishments under the management of cities and provinces./.

One imported, 16 domestic cases of COVID-19 documented on May 10 afternoon have 297 words, post on en.vietnamplus.vn at May 10, 2021. This is cached page on VietNam Breaking News. If you want remove this page, please contact us.