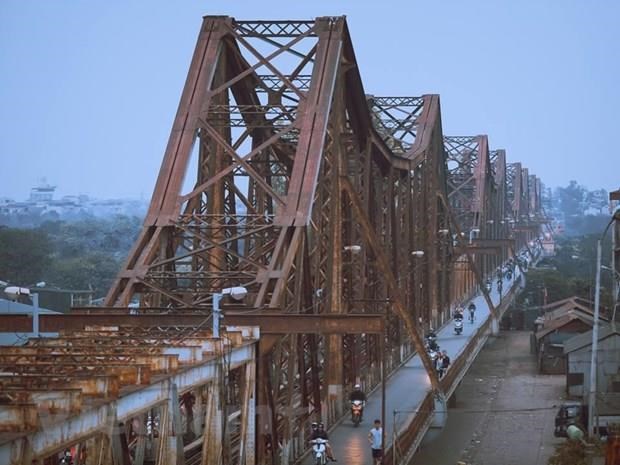 Long Biên Bridge, an iconic structure in the Vietnamese capital needs to have more funding for annual maintenance. — VNA/VNS Photo

HÀ NỘI — The Ministry of Transport will prioritise funding for the maintenance and repair of Long Biên Bridge, an iconic structure in the Vietnamese capital.

"However, the department also has asked the management units to immediately reinforce the railings, fix potholes, and install warning signs so that people know the current status of the bridge," he said.

Regarding the funding for maintenance this year, Lê Hoàng Minh said: “The ministry will give priority to funding for the Long Biên Bridge right after the budget estimate is finalised between the Ministry of Transport and Việt Nam Railway Corporation."

"Every year, the State budget still provides funding for maintenance at the highest level possible, to ensure safety for people,” Minh said.

Particularly, the road surface was cracked, causing problems for traffic, Minh said, although the bridge's management unit has regularly maintained the surface to ensure traffic safety.

The current bridge was also very weak, so the construction of the concrete surface was difficult as workers are not able to use specialised vehicles.

"Our workers have to repair the bridge surface manually, leading to a decrease in the durability of the road."

Minh said that in order to repair and maintain Long Biên Bridge, it was necessary to have a large budget.

“For example, just repainting the entire bridge needs funding up to VNĐ70 billion (US$3 million),”

“Currently, the bridge maintenance is still using the money of the railway industry, with limited funds, so the bridge cannot be clearly improved. ”

A representative of Việt Nam Railway Corporation (VNR) said that after nearly 120 years of operation, due to bombing during the American War and the speed of urbanisation, the bridge has become seriously degraded.

VNR has been assigned by the Ministry of Transport to implement projects to reinforce and repair the bridge.

He admitted that funding for national railway maintenance was limited, only meeting about 36 per cent of actual repair needs.

Phan Tiến Dũng, Deputy Head of the Infrastructure Division, VNR, said in advance of the deterioration of the bridge, VNR sent a telegram to request Hà Hải Railway Joint Stock Company to have immediate temporary solutions.

Specifically, for all minor failures, this unit needs to check and include them in the 2021 maintenance plan.

VNR has asked the management unit to use its funds to prioritise repairing the damage on the bridge surface, and installing warning signs at the two ends of the bridge, he said.

Local media has reported that Long Biên Bridge surface was damaged with potholes in many locations, meaning road users could see the river below.

All safety protection steel frames and trusses have turned yellow and rusted due to not being painted or repaired for a long time.

Although the bridge is weak, there are vehicle-restricting signs at the path leading to the bridge, but at peak hours, it still has to endure tens of thousands of motorbikes and bicycles, a local woman living on Ngọc Thụy Street, Gia Lâm, said.

In addition to annual funding for repairs, the government and relevant ministries have to set up a separate project to repair the bridge in the form of an overhaul, according to Dũng.

Before Việt Nam's independence in 1945, it was called Paul Doumer Bridge, named after the then Governor-General of French Indochina. — VNS

Ministry of transport prioritising funding for maintainace of Long Biên Bridge have 782 words, post on vietnamnews.vn at May 6, 2021. This is cached page on VietNam Breaking News. If you want remove this page, please contact us.